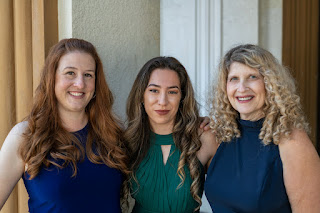 The E4TT trio of Margaret Halbig, Abigail Monroe, and Nanette McGuinness (from an E4TT Web page)

The Ensemble for These Times (E4TT) trio of soprano Nanette McGuinness, pianist Margaret Halbig, and cellist Abigail Monroe will present its next recital at the end of this coming January. The title of the program will be Below the Surface: Music by Women Composers, and the trio will be joined by violinist Ilana Blumberg. The scope of the program is extensive enough that it should be sufficient simply to summarize the enumeration in the press release:

The highlight of the program will be the World Premiere of a COVID-delayed commissioned song cycle titled “Below the Surface,” by Canadian-born, Scotland-based Call for Scores composer, Emily Doolittle (b. 1972, pictured top) for soprano and piano, to texts by Bay Area poets Rachel Richardson (b. 1979) and Rella Lossy (1934-1996), along with ten other works by women composers: Chinese-American composer Du Yun (b. 1977); 2014 Guggenheim Fellow Elena Ruehr (b. 1963); Gabriela Ortiz (b. 1964); exciting emerging Puerto Rican-born composer Angélica Negrón (b. 1981…); 2020 Opera America Discovery Grant for Female Composers recipients Lisa Bielawa (b. 1968) and Sarah Kirkland Snider (b. 1973), and Gabriela Lena Frank Academic of Music alumnae Akshaya Avril Tucker (b. 1992), Korean Jungyoon Wie (b. 1990), Seo Yoon (Soyoona) Kim (b. 1988), and Manjing Zhang (b. 1991).

If that were not enough, Richardson will also contribute to the program with a reading of her poetry.

Those that may feel overwhelmed by the number of composers contributing to this program (not to mention the diversity of their respective approaches to composition) may wish to know that, while the concert will be presented to a “physical” audience, there will also be a live-stream of the performance. Presumably, once that video has been live-streamed, it will be archived for later viewing. This will allow serious listeners to set their own pace, so to speak, allowing for “breaks” between the individual selections long enough to prepare for the transition from one compositional style to another.

The performance will begin at 7:30 p.m. on Saturday, January 29. There will also be a discussion with some of the contributing composers beginning at 7 p.m. However, as of this writing those participants have not yet been finalized. The performance will take place at the Center for New Music (C4NM), located at 55 Taylor Street, half a block north of the Golden Gate Theater, which is where Golden Gate Avenue meets Market Street. All tickets may be processed in advance through the C4NM Events page. General admission will be $15 with a $10 rate for C4NM members. The performance will be live-streamed to a YouTube Web page that will be linked to the C4NM YouTube Channel.

Posted by Stephen Smoliar at 1:50 PM