After Almost Two Years Sirota Will Get Premiere 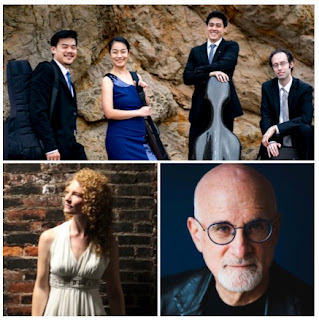 Those with long memories may recall that, at the end of February of 2020, this site previewed a series of three performances by the Telegraph Quartet (violinists Joseph Maile and Eric Chin, violist Pei-Ling Lin, and cellist Jeremiah Shaw) to present “Contrapassos,” a new composition by Robert Sirota scored for string quartet and soprano. Those concerts were scheduled for the following month, making them some of the earliest offerings to sustain cancellation due to the COVID-19 pandemic. This past Thursday the word went out that all three of the performances have been rescheduled.

Given how much time has elapsed, it seems appropriate simply to repeat the background information that was provided in the original preview article:  The libretto was written by Stevan Cavalier, who explains the text he wrote as follows:

Contrapasso is an Italian term from Dante's time meaning a punishment made by inversion of a sin. For example, one who in life was mired in the vain pursuit of worldly goods, is condemned after death to wander eternally in boiling mud. In this poem, dreams may be regarded as the contrapassos of waking life.

Sirota, in turn, has explained the structure of his composition:

The piece begins with memories of the quotidian joys of childhood, quickly turning to darkness and thoughts of early death by suicide, heart attacks in middle age, and final judgment. And yet throughout, there is the vigorous embrace of abundant life, of the beauty of our world, and of our striving for faith.

As originally planned the world premiere of “Contrapassos” will be presented by the Sierra Chamber Society in Walnut Creek. However, shortly thereafter, Telegraph will offer two additional performances within the San Francisco City limits. Both of these will be presented without charge.

The first will be presented by Noontime Concerts, and the program will also include a performance of Ludwig van Beethoven’s Opus 132 quartet in A minor. The Beethoven offering will be the only change to the program that was planned in 2020. The original selection was Opus 131 in C-sharp minor. However, Opus 132 is distinguished by its middle movement, which is about twenty minutes in duration, for which Beethoven provided a title: “Heiliger Dankgesang eines Genesenen an die Gottheit, in der lydischen Tonart” (holy song of thanksgiving of a convalescent to the Deity, in the Lydian mode). We may not yet be out of the “COVID woods” entirely; but the spirit behind that title still seems appropriate.

Noontime Concerts events take place regularly at 12:30 p.m. on Tuesdays. This particular program will be performed on February 8. The event will take place in the sanctuary of Old Saint Mary’s Cathedral, which is located in Chinatown at 660 California Street, on the northeast corner of Grant Street. There is no charge for admission, but this concert series relies heavily on donations to continue offering its weekly programs.

The second performance will take place in the Caroline H. Hume Concert Hall of the San Francisco Conservatory of Music (SFCM). While the Noontime Concerts offering will only be an hour in duration, SFCM will present a full-length concert program. Thus, in addition to the works by Beethoven and Sirota, Fischer will also join Telegraph in a performance of Arnold Schoenberg’s Opus 10 (second) string quartet in F-sharp minor, whose final two movements include a soprano along with the quartet.

This concert will begin at 7:30 p.m. on Thursday, February 10. The SFCM building is located at 50 Oak Street, between Van Ness Avenue and Franklin Street, a short walk from the Van Ness Muni Station. There will be no charge for admission, but reservations are highly recommended for those wishing to attend. The SFCM event page for this concert includes hyperlinks both for making reservations and for viewing the performance through a live stream.

Posted by Stephen Smoliar at 7:21 AM