Those that have been following this site for a while may recall an article about the album Angels, Cats & Shackles presenting three compositions by Phillip Bimstein, one for each of the plural nouns in the title. Last week two members of the Arkansas Symphony Orchestra (ASO) created a video of a performance of the first movement of Bimstein’s suite Cats in the Kitchen from this album, entitled “Eggs and Toast.” The piece was composed for oboe, flute, and pre-recorded electronics (created by Bimstein). The oboe was played by Beth Wheeler, who also plays English horn for ASO; and she was joined by Second Flute Diane McVinney.

The video was created by ASO staff as part of a series entitled Bedtime With Bach, hosted by Director of Marketing Brandon Dorris. The series was conceived in response to the cancellation of ASO concerts due to COVID-19. It provides opportunities for ASO musicians to perform and, at least in this case, help to raise the spirits of their concert audiences.

The entire video runs for a little over six minutes, the first minute of which is Dorris’ introduction; and the closing credits take about ten seconds. There are interjections of both video and cartoons relevant to the eggs-and-toast theme. In addition the performance itself was shot in the performers’ respective kitchens, thus honoring social distancing. 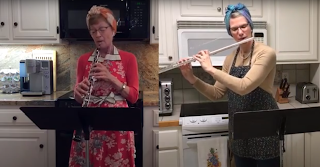 The music is an engaging interleaving of performance and Bimstein’s pre-recorded sounds. Both Wheeler and McVinney give a solid account of their respective parts, donning fifties-style kitchen attire to reinforce the high spirits of the music. This should be enough to encourage anyone to check out Bimstein’s recording to experience the intrusion of the cats on the remaining two movements.
Posted by Stephen Smoliar at 12:30 PM