Since today is the seventh anniversary of 9/11, AT&T Yahoo! decided to run another of their pseudo-scientific polls, this time asking if we "feel safer since 9/11." However distorted the results may be, they can still make for some interesting (if disheartening) reading: 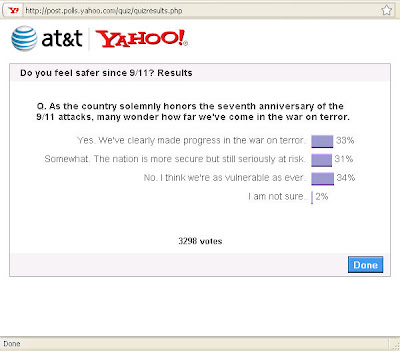 Given that I have responded to each of these polls at approximately the same time of day, I was struck by how few bothered to respond (although this may have something to do with what appears to be a serious degradation of service at AT&T Yahoo! sites, if not at Yahoo! in general). Basically, the "turnout" for this poll is about 27% that of those who voted in the McCain poll, which, as readers may recall, was the weakest of the three Convention polls I reviewed. This could well be a sign that the memory of 9/11 is not as strong as many (such as Presidential candidates) would like it to be. It leads me to wonder how strongly the American population felt about Pearl Harbor on December 7, 1948. My guess is that those who survived the Second World War still felt pretty strongly about it; and that feeling was shared by, at the very least, those closest to them (as well as those closest to the ones who did not survive). On the other hand, as I have previously argued, ours is a culture that practically revels in its ignorance of history, which is why we can be so easily manipulated by propagandists who, as I suggested yesterday, know how to "muddy the waters" of history. This combination of ignorance and confusion may also explain the almost perfectly flat distribution of responses to the AT&T Yahoo! poll: It is practically the logical equivalent of flipping a three-sided coin, the most mindless approach to making a decision. Thus, while there was a decided prevalence of strong feeling in the Convention polls, it would seem as if the participation in this poll was not only weak but also virtually thoughtless, driven, as it were, by neither logic nor emotion. I could not think of better conditions under which neoconservative ideologues could try to revive the Cold War, for which, as I have suggested, recent activities in Georgia may have been a first step. These are men (primarily, I suspect) trying to "make their own history" while blithely ignoring the qualifications on such efforts set forth by Karl Marx in The Eighteenth Brumaire of Louis Bonaparte. Meanwhile, history will proceed at our own pace, dishing out, as Marx suggested, both tragedy and farce, except that we shall have become too ignorant to tell the difference!

Posted by Stephen Smoliar at 6:50 AM