There is much in the text of John McCain's speech last night at the Republican National Convention to persuade us that "government of the people, by the people, for the people" is far more important than political parties or perhaps even what Isaiah Berlin has called "political judgement." In many ways I agree with him. If we look back at the worst examples of political judgment (to dispense with Berlin's British spelling) over the last eight years, we see far more depersonalization than the likes of an Abraham Lincoln would have found tolerable, usually because those judgments were products of the mentalities of chief executive officers and chief financial officers, rather than the sort of executives that our Constitution had in mind. As to political parties, one of the most important lessons we learned from watching John Adams was the intensity of our second President's aversion to the very concept when it emerged in full force in 1800 (although Adams' ghost probably winced when Edward Larson chose to title his book about that election A Magnificent Catastrophe).

It is, however, one thing to embrace the letter of a text and quite another to embrace the spirit of the narrator of that text. After all the text is just a text, a string of words that only comes to life when subject to interpretation, an interpretation that may not be a reflection of the intentions of the author. A narrator, on the other hand, is a human agent carrying a full portfolio of motives. The vote each of us casts in November will be for some motive-driven agent, rather than any text invoked by that agent on his behalf. Thus, while McCain's text may have invoked the spirit of Lincoln's Gettysburg Address, when we think about motives, it is hard to escape the memory of our current President, who entered the White House with words of "being a uniter, not a divider" and then subjected us to eight years of those "divisive, partisan attacks," which Associated Press writers Tom Raum and Liz Sidoti attributed to the text that Matthew Scully had prepared for Sarah Palin.

Thus, as Captain Edward Fairfax Vere sings in the Prologue to Benjamin Britten's opera Billy Budd, whatever manifestation of goodness confronts us, "There is always some flaw in it;" and, as both Herman Melville and Britten demonstrated, each in his own way, that flaw usually leads to destruction. So we need to look for such flaws, however insignificant they may initially seem, lest they become triggers for larger consequences. In McCain's case these are the words that set my "flaw feelers" twitching:

Finally, a word to Senator Obama and his supporters. We'll go at it over the next two months. That's the nature of these contests, and there are big differences between us. But you have my respect and admiration. Despite our differences, much more unites us than divides us. We are fellow Americans, an association that means more to me than any other. We're dedicated to the proposition that all people are created equal and endowed by our Creator with inalienable rights. No country ever had a greater cause than that. And I wouldn't be an American worthy of the name if I didn't honor Senator Obama and his supporters for their achievement.

But let there be no doubt, my friends, we're going to win this election. And after we've won, we're going to reach out our hand to any willing patriot, make this government start working for you again, and get this country back on the road to prosperity and peace.

Clearly that juxtaposition of "unites" and "divides" was the first alerting signal: Whether or not George W. Bush was only present at this Convention as a video image, he was clearly present in the subtext of McCain's words. This particular gesture, however, was only a storm cloud forming. The lightning bolt struck in the following paragraph with that "any willing patriot" phrase. This was pure Bush at his most those-not-for-us-are-against-us aggressive: One hand welcomes while the other is raised in a defiant fist. The welcoming hand is for the willing patriots, and the fist is for everyone else.

Who, then, decides who are the "willing patriots." Ambrose Bierce would have us believe that this is the domain of scoundrels; and, almost a year ago, we saw such a scoundrel in the person of House Minority Leader John Boehner in words that are presumably now documented in the Congressional Record. Presumably Boehner was there in the audience last night, relishing McCain's decision to invoke this particular phrase; and, for all we know, he will be out there on McCain's campaign trail, continuing to warp the semantics of love of country (or, if you prefer, "Country First") to the benefit of his senatorial colleague. McCain may have tried to assume the mantle of the "good cop," particularly in contrast with his running mate's decision to present herself as the pit bull of the team (the basis for an impromptu, and successful, joke that was not in the initially prepared text). However, he does not want us to forget that he still knows how to make a fist and deliver a wallop with it.

This brings us, once again, to the pseudo-science of the AT&T Yahoo! poll. 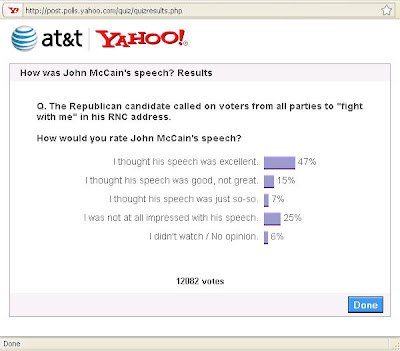 I have to say that, for all of my own observations about differentiation (not to mention McCain's affirmation of those observations), my own "vote" for this speech was a "solid so-so," a rather middling affair, particularly in the context of all the other performances being polled. I was thus not surprised to see that the McCain poll had attracted over 8000 votes fewer than the Palin poll received at the time that I case my own vote (and, for that matter, over 1000 votes fewer than the Obama poll had attracted). I was also interested to see that the distribution of the votes was closer to that of Obama, as opposed to the sharper differentiation that Palin had aroused. Bearing in mind how risky it is to read anything into these numbers, they may be a sign of an electorate that is close to as evenly divided as it had been in 2000 and 2004. If this is, indeed, the case, then we shall experience another election being fought over electoral votes rather than the vox of the popular vote; and such a fight may well leave the entire country with the same sense of malaise over detachment, if not alienation, that has been growing for eight years. In other words we may discover on Election Day that vox populi can say little more than, "Who cares?" That would be the strongest sign that the damage wrought by the current Administration has been done so well that the next Administration will not have much hope of undoing it.

Posted by Stephen Smoliar at 7:03 AM