Today is a “lucky seven” day, since the digit seven appears in the date, month, and year. Things being what they are, it is the second of three occasions this month, after which we shall have to wait ten years for the next round. Out on the bleeding edge, good fortune has come with an increase in concert-going opportunities. Several of these have already been reported, including the return of the Friction Quartet to the Old First Concerts series, the second (of two) MicroFest North events at the Center for New Music, the free Touch the Gear expo that will precede the sixteenth annual Outsound New Music Summit, and the 75 Dollar Bill concert at The Lab. Remaining events of interest will, for the most part, occur earlier in the week as follows:

Wednesday, July 19, 8 p.m., Peacock Lounge: The Peacock Lounge continues to host the reincarnation of what had been the Monthly Experimental Music Showcase at Second Act in the Haight. The program continues to follow the four-set format. This month’s performers will be as follows:
The Peacock Lounge is located in the Lower Haight at 552 Haight Street. Doors will open at 7:45 p.m. Admission will be $5 and will be restricted to those age 21 or older.

Thursday, July 20, 7:30 p.m. and Sunday, July 23, 2 p.m., Yerba Buena Center for the Arts (YBCA): As part of its Global Sounds on Screen series, YBCA will present a selection of short films on the evolution and formation of what came to be called free jazz. The program will be guest curated by Brian Belovarac and will focus on the New York-based ESP-Disk label: 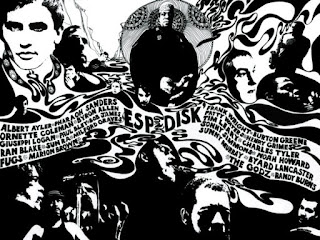 While Atlantic Records is rightfully acknowledged for having released Free Jazz: A Collective Improvisation by the Ornette Coleman Double Quartet in September of 1961, ESP provided a much broader account of the new movement, which included groundbreaking records by artists such as Albert Ayler, Pharoah Sanders, and Sun Ra. It also offered live recordings of historically-significant predecessors of the free jazz movement; and, when I was writing for Examiner.com, I devoted attention to two major reissues of Bud Powell performances at Birdland in 1953 and in Paris in 1961, respectively. Belovarac has prepared a program of five short films covering several of the ESP projects, including one about The Fugs, which was less involved with free jazz and more interested in subverting prevailing trends in both folk and rock music.

This event with take place in the YBCA Screening Room. YBCA is located at 701 Mission Street on the southwest corner of Third Street. Regular admission will be $10 with a $9 rate for students, seniors, and teachers. Tickets may be purchased at the Box Office, which is open when YBCA is open, Tuesday through Sunday from 11 a.m. to 6 p.m. Tickets may be purchased by phone by calling 415-978-2787. Finally, online purchased may be made at separate event pages for the Thursday and Sunday screenings.

Thursday, July 20, 8 p.m., Luggage Store Gallery: This week’s installment of the Luggage Store Creative Series will be a two-set evening with an emphasis on signal processing rendered as artistic expression. The first set will present the Ear Spray trio, which features Ann O’Rourke combining percussion work with processed vocals and live-processed video samples. She will be joined on percussion by Mark Pino with additional electronics work from Carlos Jennings. Pino will then join Mika Pontecorvo for a project entitled Alien Call Signs with technical roots in both complex adaptive systems and generative design architectures. Pontecorvo will handle digital and analog electronics, while Pino will shift over to waterphone. They will be joined by Adriane Pontecorvo on cello. There will also be some solo pieces, also involving complex adaptive systems, played by RiotNozzle, who will then do some duo work with Pontecorvo. The Luggage Store Gallery is at 1007 Market Street, directly across from the Golden Gate Theatre at the corner of Golden Gate Avenue and Taylor Street. Admission for this performance will be on a sliding scale between $6 and $15.
Posted by Stephen Smoliar at 9:01 AM