Almost exactly a month ago, Loft Recordings released a seven-CD box set of the complete organ works of Olivier Messiaen, all performed by Colin Andrews. Only four organists have recorded this canon in its entirety, and Andrews is the most recent of them. Andrews’ collection, however, is unique by virtue of its having an “overture” of sorts, since the very first track of the very first disc is Lionel Rogg’s “Hommage à Messiaen,” a composition that received its premiere recording when this disc, the remainder of which is the cycle La Nativité du Seigneur (the Lord’s Nativity), was originally released as a single.

Messiaen was himself, of course, an organist, although his path to this position seems almost accidental. While a student at the Conservatoire de Paris, he decided to study organ with Marcel Dupré. Drawing upon Messiaen by Peter Hill and Nigel Simeone, the author of Messiaen’s Wikipedia page describes his beginnings as an organ student as follows:

In the autumn of 1927, Messiaen joined Dupré's organ course. Dupré later wrote that Messiaen, having never seen an organ console, sat quietly for an hour while Dupré explained and demonstrated the instrument, and then came back a week later to play Johann Sebastian Bach's Fantasia in C minor to an impressive standard.

As the Italian’s like to say, if this is not true, it is still a great story! In addition, Messiaen’s first composition teacher was Charles-Marie Widor, best known today as an organ composer.

By 1929 Messiaen was skilled enough to be regularly deputized at the Église de la Sainte-Trinité (church of the Holy Trinity), filling in for their ailing organist Charles Quef. Quef died in 1931; and Messiaen’s formal application to fill the post included a letter of recommendation from Widor, along with support from Dupré. His appointment was confirmed later that year, and he remained in that post for over 60 years (which is to say almost until the time of his death). 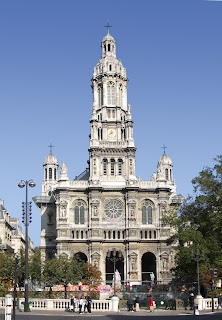 
It is therefore no surprise that just about everything Messiaen wrote for organ can be regarded as “sacred music.” Indeed, while his first published music was his set of eight piano preludes, they were preceded by his very first organ composition, “Le Banquet Céleste” (the heavenly feast), a relatively short piece to be played during the offering of Communion.

This would set the tone, so to speak, for the compositions that would follow. If earlier composers tended to follow predecessors such as Johann Sebastian Bach in drawing upon familiar hymns, Messiaen was far more occupied with the nature of the services themselves and the metaphysical mysteries they evoked. To pursue this goal, he expended considerable effort in fashioning his own language for musical expression. Even “Le Banquet Céleste” is based on an octatonic scale, which is used modally rather than tonally (i.e. not defined by dominant-tonic cadences); and Messiaen’s approach to prolongation involves simply transposing the mode every few measures.

Messiaen would continue to compose for organ throughout his life, but the organ works are a relatively small portion of his entire corpus. His very last piece for organ, the Livre du Saint Sacrement (book of the Holy Sacrament) was composed in 1984, over five years before his retirement from Sainte-Trinité and his death not long thereafter. The work is a major undertaking, since it is a cycle of eighteen pieces that together constitute what Andrews called “a summation of Messiaen's musical and theological persona, a statement of faith and a profound summary of his entire organ ‘oeuvres’.” Indeed, while the composition is as much a meditation on personal articles of faith, in the spirit, so to speak, of his preceding organ pieces, it can also be taken as a summa of those ideas that Messiaen first documented in his 1944 Technique de mon langage musical (the technique of my musical language) and subsequently developed in his Traité de rhythme, de couleur, et d’ornithologie (treatise on rhythm, color, and ornithology), eight volumes of text completed by Messiaen’s window, Yvonne Loriod, after his death in 1992. As in “Le Banquet Céleste,” Messiaen is still working with modality, rather than tonality. However, he is also working with the sorts of serial techniques found in his 1944 treatise while also incorporating birdsong (one of his favorite sources) and plainchant from the services at Sainte-Trinité, along with rhythmic patterns based on both Greek and Hindu sources.

As of this writing, neither of Messiaen’s books about his own techniques have been translated into English. Many might think that this will put English-speaking listeners at a disadvantage when it comes to listening to the selections in the collection. I am not one of them. Rather, as I have previously suggested in writing about both the Livre du Saint Sacrament and the even more massive Vingt Regards sur L’Enfant-Jésus (twenty perspectives on the child Jesus), listening to Messiaen need not depend on decoding the building blocks involved in his approaches to composition. Instead, one can take the title assigned to each movement and then allow one’s personal thoughts to explore its connotations and denotations within the context established by the music to which one is listening. This may sound more than a little unconventional, but did Bach require anything particularly different from the parishioners at the four churches he served in Leipzig when he was playing his chorale preludes?
Posted by Stephen Smoliar at 10:29 AM