Yesterday evening the Italian Cultural Institute (Istituto Italiano de Cultura, IIC) hosted a solo recital by violinist Francesco D’Orazio. While D’Orazio’s working repertoire reaches all the way back into the pre-Baroque, last night’s program was confined to the last 70 years of music by Italian composers. Furthermore, once he had presented pieces by two of the leading “grand old men” of Italian music following the Second World War, Luciano Berio and Salvatore Sciarrino, the remainder of the program fit relatively comfortably into the last twenty years.

Nevertheless, the works of those two Italian “post-War pioneers” did much to prepare the attentive listener for what would follow. The program began with the eighth of the fourteen compositions that Berio called “Sequenza” (sequence). Each of these was a study in extended techniques through which the expressiveness of both voice and instruments involves “unconventional, unorthodox, or non-traditional methods” (quote from the Wikipedia page for this concept). Furthermore, each “Sequenza” was a solo composition for a different instrument; and “Sequenza VIII” was composed for violin in 1976. (By way of context, Berio had written “Sequenza VI” for viola in 1967.)

“Sequenza I” had been written for flute in 1958. Earlier in that decade, Berio had founded the Studio di fonologia musicale with Bruno Maderna, his “laboratory” for exploring the possibilities of electronic music. If technology-based synthesis had provided Berio with new ways of thinking about sonority (as it had done for composers such as Pierre Schaeffer, Karlheinz Stockhausen, and John Cage), then his “Sequenza” efforts amounted to reflecting those thoughts back on more conventional instruments; and each of those fourteen pieces is its own highly compelling adventure as much for the attentive listener as for the performer exploring that palette of extended techniques.

D’Orazio’s performance last night was definitely adventurous for the listener. San Francisco has been a good city for those interested in the “Sequenza” pieces; and my own last encounter with “Sequenza VIII” took place almost exactly a year ago when Sara Cubarsi visited the Center for New Music. By now I am used to “the drill,” according to which the soloist sets up multiple music stands to unfold the score as a single horizontal “landscape.” One thus has a sense of the progress of the piece by watching the performer move from one end of this landscape to the other. 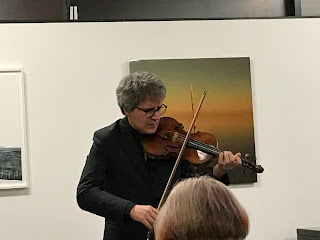 Francesco D'Orazio, by Luciano Chessa (courtesy of the photographer)

D’Orazio (shown above), on the other hand, played the piece from memory. He had clearly internalized Berio’s score so well that there was an electrifying rhetoric of spontaneity in his performance. Indeed, one could almost listen to what he was doing in the spirit of the jamming practices of some of the more “advanced” jazz musicians, who began to make themselves known during those same years of experimentation after the Second World War. D’Orazio played Berio’s music as if it were the product of some advanced particle acceleration experiment involving a collision between Stockhausen and Cecil Taylor. (Don’t ask who was accelerated to run into whom.) By the time D’Orazio had concluded “Sequenza VIII” our ears were, as John Cage once put it, “in excellent condition” for the remainder of the program, all of which was performed from printed pages.

“Sequenza VIII” was followed by the first and fourth of a set of six capriccios composed by Salvatore Sciarrino. Since Sciarrino was born in 1947, he can be taken as a “second generation” to Berio’s “first.” The choice of that noun “capriccio,” of course, reflects back on its use by Niccolò Paganini; and it makes sense to think of Sciarrino’s pieces as studies to cultivate the new techniques required to play “new music.” Indeed, one might almost think that the capriccios had been inspired by the idea of preparing violinists to play “Sequenza VIII;” but Sciarrino wrote them in 1975, the year before Berio wrote “Sequenza VIII!”

The remainder of the program then leapt forward to the much more recent past. Bay Area composer Luciano Chessa was represented by the “Corrente” and “Sarabanda” movements from his own solo violin partita, whose revised version was completed in 2013. (Chessa also introduced D’Orazio at the beginning of the program.) All of the other names were probably unfamiliar to most of the audience, although all of them were older than Chessa. From oldest to youngest, these were Curt Cacioppo, Ivan Fedele, Michele dall’Ongaro, Nicola Sani, and Fausto Sebastiani. This made for a generous number of “first contact” experiences, the most accessible of which was probably Cacioppo’s 2015 elegy, whose rhetoric was recognizably elegiac. Similarly, Sani’s “Raw,” composed in 2005, came across as a vigorous exploration of some of the most basic (raw?) sonorities that a violin could yield. The only piece given any explanation by D’Orazio was “La Musica di E.Z.” by Michele dall’Ongaro, currently President-Superintendent of the Accademia Nazionale di Santa Cecilia. This was apparently inspired by a horror novel in which evil spirits are kept at bay by music played by a violinist.

Taken as a whole, the program amounted to a study in which just about every conventional concept of “theme” had been abandoned. Time was structured according to the unfolding of different sonorities without any segmentation being established through techniques based on melody, harmony, or counterpoint. Indeed, the only sense of a theme came from D’Orazio’s encore, the twelfth of the thirteen solo violin pieces Michael Nyman collected under the title Yamamoto Perpetuo. These were written for the Japanese violinist Yohji Yamamoto and released on the album Michael Nyman for Yohji Yamamoto. This piece involves a minimalist exploration of a single motif with a sense of a modal center that made for a refreshing shift in listening priorities.
Posted by Stephen Smoliar at 7:18 AM