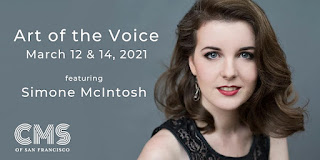 One of the more regrettable cancellations to take place during the early stages of COVID lockdown, before concert organizers began to embrace streaming as a viable alternative, involved a performance originally scheduled by Old First Concerts for April 19 of last year. This involved a program prepared by the Chamber Music Society of San Francisco (CMSSF), the string quartet of violinists Jory Fankuchen and Natasha Makhijani, violist Clio Tilton, and cellist Samsun van Loon. This program was to feature mezzo Simone McIntosh as a guest artist. I particularly regretted the cancellation, since one of the last performances I experienced prior to lockdown involved McIntosh performing Olivier Messiaen’s Harawi song cycle as part of the Schwabacher Recital Series.

Fortunately, thanks to the sponsorship of Edwin and Davidson Bidwell-Waite, CMSSF will be able to present a virtual concert entitled Art of the Voice. McIntosh will join CMSSF to perform “Il tramonto,” Ottorino Respighi’s setting of the text of Percy Bysshe Shelley’s poem “The Sunset,” translated into Italian by Roberto Ascoli. She will also present an “encore” offering of one of the songs composed by Nadia Boulanger, entitled simple “Cantique,” in an arrangement for voice and string quartet. These performances will be framed by CMSSF performances of first movements from two First Viennese School string quartets. The program will begin with the opening of the fourth of Ludwig van Beethoven’s Opus 18 string quartets, in the key of C minor. The concluding selection will be the opening of Joseph Haydn’s Hoboken III/78 quartet in B-flat major, nicknamed “Sunrise.”

Eventbrite is handling tickets for two streaming performances of this program. The first of these will take place at 7:30 p.m. on Friday, March 12, followed by a 6 p.m. performance on Sunday, March 14. General admission will be $25 with a Supporter rate of $50. For those with limited finances, there is also a Sliding Scale admission for $10. After the purchase has been finalized, Eventbrite will send electronic mail with the URL for viewing the event. On-demand viewing of the video will be available through March 22.

Posted by Stephen Smoliar at 10:09 AM