Yesterday evening the Ross McKee Foundation launched its spring season with its tribute concert honoring pianist Robin Sutherland, whose life ended this past December 18. Like the events of the fall season, this concert was a video live-streamed through the Ross McKee Foundation YouTube channel, which is now available for subsequent viewing. Sutherland was Principal Pianist for the San Francisco Symphony (SFS) for 45 years; and pianist Marc Shapiro, who shared SFS duties with him, was one of seven pianists to record video performances in Sutherland’s memory, all of which were compiled for last night’s live-stream. The other performers were Christopher Basso, Britt Day, Elizabeth Dorman, Jeffrey Kahane, Jeffrey LaDeur, and Keisuke Nakagoshi. The program then concluded with an audio recording of Sutherland playing Earl Wild’s “Hommage à Poulenc.”

This final offering served up a witty twist that I suspect Sutherland would have appreciated. Wild’s “hommage” had as much to do with Johann Sebastian Bach as with Francis Poulenc. Indeed, the “spinal cord” of this short composition was taken from the Sarabande movement of Bach’s BWV 825 keyboard partita in B-flat Major. Wild seemed to summon up a vision of Poulenc playing Bach at the piano, gradually succumbing to the temptation to add some of his own harmonic and motivic twists. To help the listeners “get the point,” the Sutherland recording was preceded by Dorman’s performance of that Saraband movement as Bach had written it. In addition, Nakagoshi oriented listeners with a sense of Poulenc’s piano rhetoric by playing “Mélancolie” as his offering to the evening’s program. 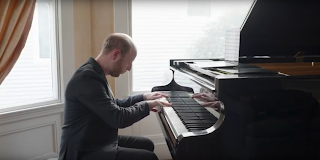 Diversity was the key attribute of the entire offering, reflected by both the music being played and the keyboard styles of each of the players. In the midst of all of that diversity, some offerings were bound to be more memorable than others. In terms of my own dispositions towards the keyboard repertoire, I have to say that I was particularly drawn to the opening selection, Ferruccio Busoni’s solo piano arrangement of the second (Andantino) movement from Wolfgang Amadeus Mozart’s K. 271 piano concerto in E-flat major. Busoni clearly knew how to distinguish the ripieno passages from those for the solo piano (just as Bach had done in his BWV 971 “Italian” concerto for solo keyboard); and Jeffrey LaDeur’s account of Busoni’s text reflected every aspect of the arranger’s insight.

Posted by Stephen Smoliar at 7:06 AM