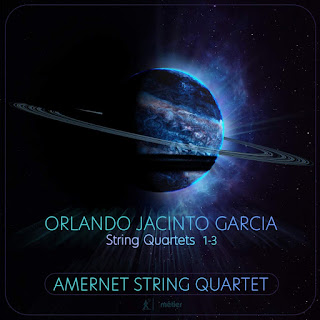 from the Amazon.com Web page for the recording being discussed

This coming Friday Métier Records will release an album of the first three string quartets by Cuban-American composer Orlando Jacinto Garcia. Each was composed in a different decade of the composer’s life, and each reflects its own approach to a genre that is now well over three centuries old. The performers are the members of the Amernet String Quartet: violinists Misha Vitenson and Avi Nagin, violist Michael Klotz, and cellist Jason Calloway. Garcia is a Professor of Music at Florida International University in Miami, where he serves as Director of the School of Music and Director of the Composition Program. Amernet is Quartet in Residence at that same university. As usual Amazon.com has created a Web page for processing pre-orders.

Those who consult his Wikipedia page will see that Garcia’s music has been recorded on an extensive number of different labels. This new recording marks his debut on the Métier label, which has provided the platform for the first recordings of all three of these quartets. Taken as a whole, the chronological account of these quartets makes for an interesting journey, highlighted by the composer’s decision to assign a title of each of them.

The first is entitled “rendering counterpoint;” and it was composed over the course of three weeks in February of 1985. The only composition teacher identified by name on Garcia’s Web page is Morton Feldman; and anyone familiar with that composer’s “late period” will appreciate the influence of teacher on student. Nevertheless, “rendering counterpoint” reflects Garcia’s own voice; and performance takes less than half an hour, suggesting that the composer was not interested in Feldman’s style of extended duration. However, the music encourages focused attention to detail on the part of the listener and an awareness of an evolutionary approach to change, rather than the conventions of a planned structure. Calling this composition “Feldman for the impatient” would be inappropriately derogatory. Nevertheless, Garcia probably appreciated the demands that Feldman imposed on listeners and decided to seek out a more accessible path.

The title of the second quartet, composed in the summer of 1998, is “cuatro,” the Spanish word for “four.” This is the shortest of the three quartets on the album, lasting a little more than fifteen minutes. The program notes, written by Calloway, enumerate how the music reflects a diversity of semantic interpretations of the title word. In the midst of all of those interpretations, the listener can appreciate how Garcia has extended his distance from Feldman. Where the sonorities in “rendering counterpoint” were meticulously sparse, Garcia’s rhetoric in “cuatro” does not shy away from lush qualities. That said, both of these quartets suggest a listening experience that can be likened to viewing the music through a microscope.

The third quartet was composed about twenty years after the second. The title is “I never saw another butterfly,” which is the title of a book of art and poetry created by the children interned by the Nazis at Terezín (Theresienstadt). For those unfamiliar with its history, Terezín was a transit camp, holding prisoners before dispatching them to the Nazi death camps. However, it was also an instrument of propaganda, allowing composers being held prisoner to create and perform new works. Those composers included Hans Krása, Viktor Ullmann, Gideon Klein, and Pavel Haas, none of whom lived to see the end of World War II.

Garcia purchased a copy of I Never Saw Another Butterfly during a visit to the United States Holocaust Memorial Museum in Washington. It would probably be fair to say that the third quartet is the most subjective of the three he has composed to date. Calloway writes that Garcia “conceived the piece as a kind of requiem for all children who have been the victims of senseless violence.” Nevertheless, the music is not explicitly programmatic. If anything it returns to the durational framework of the first quartet and the spare qualities of that quartet’s sonorities.

That said, each of the three quartets offers its own characteristic listening experience. As a result, I would not advocate listening to this CD as a beginning-to-end process. Because each quartet has its own individual framework, the attentive listener will not be well served by allowing them to bump into each other, so to speak. Fortunately, we have technologies that will allow each of the quartets to be experienced individually; and seriously attentive listeners will be better served by such devices.

Posted by Stephen Smoliar at 10:07 AM