This morning at 10 a.m., SFSymphony+, the on-demand streaming service hosted by the San Francisco Symphony (SFS), continued its CURRENTS series with a program of Indian Classical Music prepared by tabla master Zakir Hussain. Many of my generation first became aware of Indian music as a result of the Beatles having traveled in 1968 to Rishikesh in that country to take part in a three-month meditation “Guide Course” at the ashram of Maharishi Mahesh Yogi. However, their “discovery” of Indian music and performance techniques was predated by Yehudi Menuhin meeting sitar player Ravi Shankar the previous year, an encounter that would lead to the two of them making a recording entitled West Meets East.

The result was a set of tracks that had Menuhin performing with not only Shankar but also other musicians that often played with him. These included the tabla master Alla Rakha and two tambura players, Nodu Mullick and Amiya Dasgupta. I offer this as context for today’s new video release, because Hussain is Rakha’s son. Furthermore, the program he prepared, entitled Rhythm Spirits involved “West meets East” performing. The other “Eastern” musician was Kala Ramnath performing Indian classical violin.

The “Western” side involved a generous number of SFS musicians. This included an all-percussion performance of Hussain’s “Laya-Jam” in an arrangement he prepared with Neelamjit Dhillon with parts for four SFS percussionists, Principal Jacob Nissly along with Bryce Leafman, James Lee Wyatt III, and Stan Muncy. Hussain was the only one of the five of them not playing from printed score pages, leading me to suspect that the breadth of his technique allowed him to contribute a wide diversity of spontaneous rhythms that would blend readily with the percussion parts that had been committed to notation.

“Laya-Jam” was both preceded and followed by Western string instruments accompanying both Hussain and Ramnath. These were also arrangements of traditional Indian music, both of which were prepared by Dhillon and Chris Votek. Most interesting was the contrast between Ramnath’s meend (glissando) technique and the minimizing of vibrato on the Western instruments. Ramnath also explained that, unlike a Western scale, a raga involves how the sequence of pitches is phrased, which includes both meend and gamakas (oscillations around a single pitch).

In the opening selection, “Bichhua,” composed by Ustad Allarakha Qureshi, Hussain and Ramnath performed with Barbara Bogatin on cello, Scott Pingel on bass, and Douglas Rioth on harp. Rioth’s playing could almost be taken as a continuo of chords among which melodic lines would unfold; and, for the most part, Pingel reinforced this “continuo effect.” Bogatin was particularly interesting, however, in playing without vibrato to contrast her thematic lines with those of Ramnath.

The final selection was an arrangement of a traditional song entitled “Sands of Time.” Both the title and the thematic material were intended to evoke the desert lands of Rajasthan: 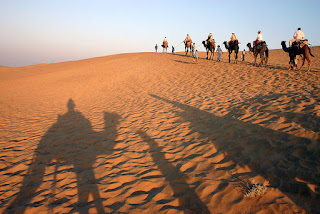 The Thar desert of Rajasthan (photograph by user:Flicka, from Wikimedia Commons, licensed under the Creative Commons Attribution-Share Alike 3.0 Unported license)

For this performance Hussain and Ramnath were joined by two violinists (In Sun Jang and Raushan Akhmedyarova), two violas (Katie Kadarauch and Christina King), cello (Amos Yang), and bass (Daniel G. Smith). This rich instrumentation made for a particularly absorbing listening experience as Ramnath wove her own characteristic sonorities in and among those established by the SFS players.

Indeed, the relationship among the instruments was particularly facilitated by the always perceptive skills of Frank Zamacona directing the resulting video. By now regular readers are familiar with Zamacona’s expertise in using video to enhance the act of viewing an opera, rather than just “capturing” the performance. One might go so far as to say that, in this case, the resulting video guides the ear through the unfamiliar terrain of Indian classical music by guiding the eye through those performative acts that result in how that music is made. Neither Menuhin nor the Beatles served up such a constructive context for appreciating the nature of an unfamiliar domain.

Posted by Stephen Smoliar at 2:21 PM