This weekend’s streamed Opera in ON offering presented by the San Francisco Opera (SFO) is Giacomo Puccini’s La rondine (the swallow). First performed at the Opéra de Monte-Carlo on March 27, 1917, this is “late period” Puccini. Unsatisfied with the premiere, Puccini worked on several revisions. However, the last works of his life Il trittico (the triptych) and Turandot (completed by Franco Alfano after the composer’s death) yielded far more satisfying results; and Puccini died before finding a revision of La rondine that satisfied him. Tito Ricordi refused to publish it the original version, dismissing it at “Bad Lehár.” One might also condemn it as a poor man’s La traviata or a failed attempt to get the lightning of La bohème to strike twice.

The SFO production was staged in November of 2007. It was shared with the Théâtre du Capitole de Toulouse and the Royal Opera at Covent Garden. The production was conceived by Nicolas Joël and directed in San Francisco by Stephen Barlow. The conductor was Ion Marin, and Ian Robertson prepared the SFO Chorus. 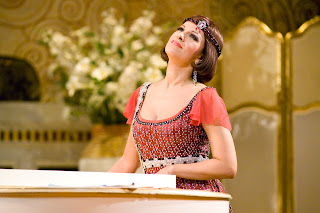 It is easy to appreciate why this opera is compared with La traviata. Visiting Paris for the first time, Ruggero Lastouc (tenor Misha Didyk) is smitten with love for Magda de Civry (soprano Angela Gheorghiu). In this case, however, it is not his father that sets him straight but Magda herself. (This production marked Gheorghiu’s SFO debut.) Sitting in the audience in 2007 (before I started writing for Examiner.com), I came away thinking that I had just watched a two-hour episode of Sex in the City.

While I still find the opera relatively disappointing, its distance in time has provided me with more perspective. With Sex in the City now a distant memory, I was better equipped to approach Joël’s production on its own terms. Furthermore, this was a narrative that demanded subtleties of intimacy from not only the lead characters but also the relationship that unfolds between the poet Prunier (tenor Gerald Powers) and Magda’s maid Lisette (soprano Anna Christy). If neither the music nor the words could do justice to that intimacy, video director Frank Zamacona conceived any number of highly informative close-ups, which afforded far more sympathy than the distance between the stage and an opera-lover in the audience.

Nevertheless, even with the impact of video, I still found myself wondering too often how long it would take the plot to resolve.

Posted by Stephen Smoliar at 3:17 PM