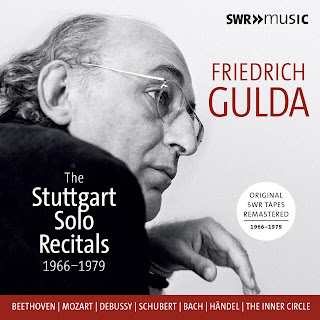 Since September of 2019, SWR>>music has released a series of five albums of performances by the Austrian pianist and composer Friedrich Gulda. I first became aware of him during my graduate student days, when the Musical Heritage Society became the American distributor of his recordings of all 32 of Ludwig van Beethoven’s piano sonatas. Not long after that I remember listening to jazz on the radio and hearing his name announced for the very first time. However, it was only after I made the shift from Silicon Valley researcher to writing about the performance of music that I first began to pay attention to the recordings he had made.

All five of the albums involve remastered tapes recorded by Südwestrundfunk (SWR, southwest broadcasting), the public radio service for the southwest of Germany. There is considerable variation in the amount of content on each of the albums, so they will be treated individually in the order of their release. As of this writing, all of them are available from Amazon.com only for digital download. Given the problems of delay involved with postal delivery, even within the United States, I tend to agree with Amazon that downloading is the most efficient way to gain access to the content.

The title of the first album in the series is The Stuttgart Solo Recitals: 1966–1979. The content is divided into seven discs; and Amazon includes the booklet as part of the last of the discs, which is also the shortest. The repertoire covers a broad span of music history, with Johann Sebastian Bach and George Frederic Handel at one end and a half-hour of free improvisation at the other.

Consistent with those aforementioned recordings, the lion’s share of the content goes to Beethoven with performances of nine of the piano sonatas. These include such usual favorites as Opus 13 (Sonata Pathétique) in C minor and the second Opus 27 sonata (“Moonlight”) in C-sharp minor. However, there are also impressive accounts of three of the late sonatas, Opus 101 in A major, Opus 106 (“Hammerklavier”) in B-flat major, and Opus 110 in A-flat major.

Somewhat perplexing is Gulda’s decision to play six of the prelude-fugue couplings from The Well-Tempered Clavier on an electrically amplified clavichord. Since all of these recitals took place in SWR studios, one would have thought that judicious microphone placement would have been sufficient. His instrument did not have a damper pedal, thus imposing the same fingering constraints as a harpsichord. However, since the clavichord string is struck by a metal pin known as the tangent, that pin can maintain touch with the string, allowing for pitch-bending techniques that allow for a richer sense of intonation than can be elicited from the plucked strings of a harpsichord. Perhaps the electronic amplification was more for the sake of Gulda’s listening, rather than how the sounds would be captured for broadcast.

The title of the improvisation on the final album is “Perspektive No. 1.” Gulda is joined by Günther Rabi on bass and Ursula Anders on drums. He departs from the piano keyboard from time to time to play not only a set of recorders of different sizes but also a crumhorn. The original performance took place on the second half of the program that began with the Bach preludes and fugues. Unfortunately, the recording of that session was lost; so SWR>>music replaced it with a recording of a similar improvisation session that took place four months later. What is most engaging in this final track is the diversity of sonorities, exploring dimensions of listening that are seldom encountered in the practice of “modern jazz” in the Seventies, when this recording was made.

Posted by Stephen Smoliar at 12:05 PM