The New Year seems to be getting off to a slow start at the Center for New Music (C4NM). However, next month is already shaping up to be an interesting one; and we should always be prepared for the current Calendar Web page to be updated before next month has concluded. For those who have not yet visited C4NM, attending one of the concerts is worthy of a New Year’s Resolution; and next month would be the perfect time to fulfill that resolution.

C4NM is located at 55 Taylor Street, half a block north of the Golden Gate Theater, which is where Golden Gate Avenue meets Market Street. Not all of the events listed below will have the same price of admission, so that information will be provided with the description of each particular show. However, all tickets may be purchased in advance through a Vendini event page. Hyperlinks to the appropriate Web pages will be attached to each of the dates in the following summary:

Friday, January 12, 8 p.m.: The “End Times” Ensemble is a special quartet formed for one night only to present a program entitled Punk in Times of War. The performers are Naomi Stine (piano), Mia Bella D’Augelli (violin), Kyle Beard (clarinet and bass clarinet), and Misha Khalikulov (cello). Those who know their twentieth-century music will probably recognize this as the instrumentation required for Olivier Messiaen’s “Quatuor pour la fin de temps” (quartet for the end of time).

Messiaen wrote this piece during the Second World War when he was interned at Stalag VIII-A, a prisoner-of-war camp in Görlitz in Germany (now the city of Zgorzelec in Poland). Another prisoner at that camp was the clarinetist Henri Akoka, who inspired his first sketches for the piece, which developed into a quartet after he met two other prisoners, violinist Jean le Boulaire and cellist Étienne Pasquier. The piece was first performed in that camp. Ironically, the occasion even merited a program sheet: 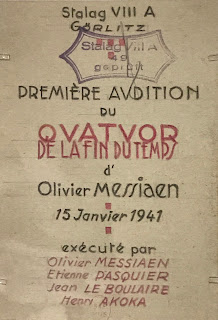 As can be seen from that sheet, this January 15 will mark the 77th anniversary of that premiere; and “End Times” has organized the evening around their performance of Messiaen’s quartet. The program will also include “MISMA,” a five-movement work by Brett Austin Eastman inspired by a diverse collection of female artists: Hildegard von Bingen, Solange Knowles, Amber Sermeño, Ara Jo, Etta James, and Kathleen Hanna, as well as pianist Stine. They provide sources for quotations translated into music by a cryptogrammic technique that Messiaen created and called “the language of the angels.” The remaining work on the program will be Nick Vasallo’s three-movement suite When the War Began, composed during the first two months of 2013 as an intense reflection on the horrors of war. General admission will be $12 with an $8 rate for both C4NM members and the underemployed.

Tuesday, January 16, 8 p.m.: Jason Thorpe Buchanan will curate a performance by D U C K R U B B E R. This is a trio consisting of cellist Tyler Borden and two computer musicians, Paul Hembree and James Bean. They came together as a group to perform Brian Ferneyhough’s “Time and Motion Study II,” which he scored for vocalizing cellist and live electronics. However, all three of them are also composers, and they have been building up a performing repertoire since that initial occasion. They will perform a selection of their own works as well as Ashley Fure’s “Wire and Wool,” scored for cello and electronics. General admission will be $15 with a $10 rate for C4NM members.

Wednesday, January 17, 8 p.m.: Trios for Two will be a duo recital that brings violist Molly Gebrian together with Danny Holt, who plays piano and percussion simultaneously. As might be guessed, this pair's repertoire consists of commissioned works, and over 25 composers have contributed since the duo launched in 2013. This recital will serve to celebrate the release of the first CD, on the Innova label, documenting the results of this project. A program has not been announced; but the composers contributing to that album are Casey Cangelosi, Karl Blench, Daniel Corral, Christopher Goddard, Ingrid Lee, and Chiayu. General admission will be $15 with a $10 rate for C4NM members.]

Thursday, January 18, 8 p.m.: Kurt Rohde will curate a solo recital by his Left Coast Chamber Ensemble colleague Stacey Pelinka, performing on a variety of different instruments in the flute family. The title of her program will be Body to Noise, and she will present diverse ways in which the work of the physical human body can be translated to sound. To this end she will perform compositions by Amadeus Julian Regucera, John MacCallum, and Toshio Hosokawa. General admission will be $15 with a $10 rate for C4NM members.

Saturday, January 20, 8 p.m.: Emma Logan will curate the return of the Fête Concert Series, whose programs are structured around birthday parties. The celebrant on this occasion will be composer Libby Larsen. The performers will include soprano Anne Hepburn Smith, singing “Songs from Letters,” inspired by the letters of Calamity Jane. Violist Justine Preston, clarinetist James Pytko, and pianist Paul Dab will all be featured as soloists and will perform together as a trio to present “Black Birds, Red Hills,” which was inspired by the paintings of Georgia O’Keeffe. These events also feature a new arrangement of “Happy Birthday” in honor of the celebrant; and that arrangement will be composed by Logan.

General admission will be $20 with a $10 rate for C4NM members, seniors, and students. Purchase of a ticket also includes wine, snacks, and, as always, a party hat. A pre-concert reception will begin at 7:30 p.m.

Saturday, January 27, 3 p.m.: Mezzo Ilana Walder-Biesanz will present a program entitled Trousers and Tragediennes. Working with pianist Daniel Alley, she has prepared a recital of arias in five languages covering a broad scope of music history. As her title suggests, the program will be divided into two parts. The first part will present “trouser role” arias from operas by Wolfgang Amadeus Mozart, Christoph Willibald Gluck, Charles Gounod, George Frederic Handel, and Johann Strauss. The second half will feature tragic roles from operas by Jules Massenet, Georges Bizet, Henry Purcell, Pyotr Ilyich Tchaikovsky, and Francesco Cavalli. The performance will include a gratuitous change of clothing and an appearance by a guest baritone. General admission will be $10 with an $8 rate for C4NM members.

Sunday, January 28, 3 p.m.: Programming for January will conclude with the world premiere of the latest musical production by composer and pianist D. Riley Nicholson. “Shimmer” is a 45-minute five-movement work for solo piano and electronics. The interface for the electronics will be designed and implemented by sound artist Zach Miley. In addition artist Robby Gilson has created visual designs specifically created to be projected during the performance. The program will also include selections from the Book of Sounds by Hans Otte, which shares with “Shimmer” the exploration of resonance and diverse approaches to ostinato patterns. General admission will be $20 with a $15 rate for C4NM members and students.

Because box office sales have been so positive, both Nicholson and C4NM have arranged to give Shimmer a second performance. This added show will take place the following night, beginning at 8 p.m. on Monday, January 28. Ticket prices will be the same, and a Vendini event page has been set up for advance purchase.]
Posted by Stephen Smoliar at 9:52 AM