As readers may have observed yesterday, it is not too soon to start thinking about concerts taking place at the beginning of the New Year. The Upcoming Events list on the Web site for the Red Poppy Art House already has two events scheduled for January. My guess is that many more will follow. However, the events that have already been posted are interesting enough to deserve this advanced heads-up notification. This page can then be updated as subsequent announcements arise; and the “shadow” Facebook site will be used to announce updates when they appear.

The Red Poppy is located in the Mission at 2698 Folsom Street on the southwest corner of 23rd Street. Tickets will be available only at the door. Both of the January shows listed thus far will begin at 7:30 p.m. Those who have not previously been to the Poppy need to know that it is a small space. It is almost always a good idea to be there when the doors open one half-hour before the performance is scheduled to begin. Here are the specifics for those two events:

[added 12/18, 9:10 a.m.: Four new items have been added to the Upcoming Events list, which are being inserted to maintain chronological order, all of them also beginning at 7:30 p.m.:

Friday, January 5: This will be a two-set evening. The major set will be the second at which Ren Geisick will present songs from her new CD, Ren, Love Song, along with new original music and jazz-meets-country arrangements. She will perform with a quartet, whose members are Jon Dryden (piano), Danny Gerz (bass), Bob Welsh (guitar), and Jim Kassis (drums). The opening set will present another vocalist Adira Shark, who will accompany herself on guitar. Admission will be on a sliding scale between $15 and $20.] 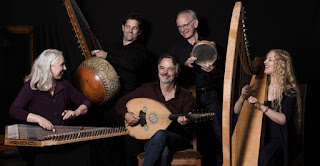 Saturday, January 6: The Project is a quintet that explores Arabic, Turkish, Armenian, Eastern European, Celtic, Medieval, and West African music. The title of their program will be Stringed Instruments from Around the World. The performers are Daniel Berkman (percussion and 21-plucked-string West African kora), Gary Haggerty (oud and tarhu, both lute-like instruments), Peter Maund (percussion), Sarah Michael (tarhu and the zither-like qanun), and Diana Rowan (harps). Taking indigenous music as a point of departure, the group explores both unexpected approaches to instrumentation and original compositions. Admission will be on a sliding scale between $20 and $25.

Friday, January 12: Karavan Sarai is the duo of dancer Schirin Chams-Diba (who also provides percussion) and vocalist Narayan Sijan. Sijan also plays electric version of both the oud and the saz and is also responsible for programming digital control of those instruments. The title of their program will be Mystic Melodies, Electronic Grooves & Dance from the Silk Road, which probably does not require further elaboration! Admission will be on a sliding scale between $15 and $20.]

Saturday, January 13: The following week will see a more conventional jazz quartet consisting of Darren Johnston on trumpet and Matt Renzi on woodwinds, with rhythm provided by Adam Shulman on piano and Eric Vogler on bass. The program, on the other hand, will be anything but conventional. Its title is Bye Bye Bartok – Reimagining Great Symphonic & Chamber Themes. The quartet will take themes by Johann Sebastian Bach, Béla Bartók, Erik Satie, Pyotr Ilyich Tchaikovsky, and others. There will then be a second set of original compositions by the quartet members. This is likely to be an evening for those subscribing to my mantra that jazz is chamber music by other means. Admission will be on a sliding scale between $15 and $20.

Sunday, January 14: This will be another CD-based program. Songwriter Rob Flax will perform music from his debut solo record, Distractible Boy, accompanying himself on the violin. He will be preceded by an opening set taken by pianist Katy Stephan, who will be singing new material that will be appearing on her upcoming album, Our Trespasses. Admission will be on a sliding scale between $15 and $20.]

Friday, January 19: This will be a program entitled Bay Area's Women in Jazz. It was conceived to bring together some of our best female jazz musicians for a single program. Genres will include straight-ahead jazz, blues, swing, bebop, gospel, soul, and a grand finale of Brazilian tunes featuring a batucada percussion jam. Admission will be on a sliding scale between $20 and $25, and information about advance purchase of tickets will be made available at a later date. Participating performers will be vocalists Adriana Morrero, Kimiko Joy, and Valerie Trout, Madeline Duran on saxophone, Chloe Jane Scott on flute, Gaea Schell alternating between flute and piano, and rhythm provided by pianist Tammy Hall, bassists Caroline Chung and Ruth Davis, and Amy Molinelli on percussion. Samba Mob will lead the batucada jam. This concert will begin one half hour later than usual a 8 p.m.]

Saturday, January 20: This will be another two-set evening. The first set will be taken by Sisu BrassLand, which consists of five brass players and one percussionist. (Names have not yet been provided.) The group will perform original music composed by leader Aaron Priskorn. The second set will be taken by the Mughal Muesli trio, whose members are Xavier Del Castillo (tenor saxophone), Mat Muntz (bass), and Vicente Hansen (drums). They will present tunes from their debut album, Imperial Cereal, whose tracks are as cross-cultural as the group's name. Admission will be on a sliding scale between $15 and $20.]

Sunday, January 21: Bay Area's Women in Jazz will be followed by a "sequel" program. With the exception of Chung, this will involve an entirely new round of personnel. Vocalists will be Jenna Mannina, Emily Aften Moldenhauer, Rennea Couttenye, Helen Palma, and Hanna Glass, the last doubling on violin. Other rhythm players will be guitarist Carmen Getit, pianists Helen Orzel and Richelle Scales, the latter also providing vocals, and drummers Katrine Spang-Hannsen and Jae Jacksdon. Admission will be on a sliding scale between $15 and $20.]

Friday, January 26: Derek Lassiter will return to the Poppy to offer a selection of songs from his past recordings, along with some new ones. Backup will be provided by Tammy L. Hall (piano), Art Khu (bass and guitar), and Ruth Price (drums). Admission will be $20. Information about advance purchase of tickets will be made available at a later date.

Saturday, January 27: Jazz guitarist Howard Alden has been working with violinist Kit Eakle on a project called DjangoSphere. As the project's name implies, the program will consist of music inspired by both Django Reinhart and Thelonious Sphere Monk. Selections will include both original compositions and treatments of standards inspired by these two jazz icons. Rhythm will be provided by Rory Judge on drums and Don Bennett on bass. Admission will be $25, and this is another concert for which information about advance purchase will be made available at a later date.]
Posted by Stephen Smoliar at 8:53 AM