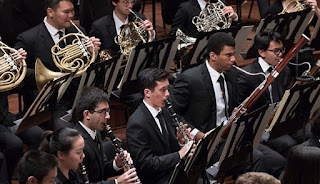 As has already been observed, this season marks the 35th anniversary of the San Francisco Symphony Youth Orchestra (SFSYO). The second performance of the season will take place at the beginning of March, and conductor Christian Reif has prepared some imaginative programming for the occasion. Most important will be the premiere performance of “… within the shifting grounds …,” a new work by Iranian composer Anahita Abbasi on a commission involving collaboration the International Contemporary Ensemble (ICE). Members of ICE will participate in the program. This performance will be live-streamed to the Facebook Page for the San Francisco Symphony. The performance is expected to begin at approximately 2:20 p.m.]

The program will also include one of a set of fandangos scored by Michael Burritt for six percussionists. Burritt is currently Chair of the Woodwinds, Brass, and Percussion Department at the Eastman School of Music of the University of Rochester. While the remainder of the program will consist of more familiar composer names, many of the selections will also involve departures from the ordinary. For example Richard Strauss will be represented by his Opus 7, a serenade in E-flat major scored for thirteen wind instruments, which he composed in his late teens. The selection by the twentieth-century composer Carl Ruggles will be his 1921 “Angels,” which is scored for a muted brass ensemble. Bolder brass sonorities will be found in a selection of canzonas by Giovanni Gabrieli, possibly in the arrangements for modern instruments prepared by Tim Higgins, Principal Trombone of the San Francisco Symphony. Those craving the more familiar will be satisfied by the second half of the program, which will be devoted to Ludwig van Beethoven’s Opus 92 (seventh) symphony in A major.

This concert will be held in Davies Symphony Hall, beginning at 2 p.m. on Sunday, March 4. Ticket prices are $55 for reserved seats in the Loge and Side Boxes and $15 for general admission. They may be purchased online through the event page for this program on the SFS Web site, by calling 415-864-6000, or by visiting the Davies Box Office, whose entrance is on the south side of Grove Street between Van Ness Avenue and Franklin Street. (This is also the main entrance to the hall itself.) There is also a hyperlink for sound clips from the Beethoven selection, which requires Flash for listening. The Box Office is open from 10 a.m. to 6 p.m., Monday through Friday, and from noon to 6 p.m. on Saturday.
Posted by Stephen Smoliar at 12:17 PM