2019 Merola Festival Off to a Delightful Start

Last night in the Concert Hall of the San Francisco Conservatory of Music, the 2019 Summer Festival of the Merola Opera Program got under way with the first of two performances of the Schwabacher Summer Concert. As in the past, the program was structured around staged scenes. These included the entire first act of Giacomo Puccini’s La rondine (the swallow) at the beginning and the final scenes of Giuseppe Verdi’s Il trovatore (the troubadour) as the conclusion. Between these two massive “bookends,” there were briefer episodes from Gaetano Donizetti’s Lucia di Lammermoor (the bride of Lammermoor), Richard Strauss’ Die schweigsame Frau (the silent woman), and Charles Gounod’s Faust.

All scenes were staged by Merola alumnus Jose Maria Condemi. They were sung in their respective languages with translations projected above the performing area. The stage of the Concert Hall was filled primarily by the Schwabacher Summer Concert Orchestra conducted by Craig Kier. However, the front portion that would normally be lowered to create an orchestra pit was elevated to serve as the performing area for the vocalists. Twelve of this season’s Merolini vocalists took the respective roles of the scenes; and one of the Apprentice Coaches, Christopher Koelzer, provided the piano accompaniment for one of the episodes in La rondine.

All of the vocalists were consistently impressive, as comfortable with low comedy as with tragedy at its most melodramatic. However, as is often the case, it is the imaginative approach to the comic that made the most lasting impressions. This was particularly true of Korean soprano Hyeree Shin, who gave a dynamite account of the “title role” in the excerpt from Die schweigsame Frau. This is one of Strauss’ least-known operas, although in this country it has been performed in New York, Santa Fe, and Pittsburgh.

Stefan Zweig provided a major overhaul of Ben Jonson’s play Epicœne, or The Silent Woman, and one major result is that the title character is anything but silent. The plot revolves around the effort to con the misanthrope Morosus (who abhors the breaking of silence) into marrying a modest and pious (not to mention silent) woman named “Timida.” Once the marriage ceremony has concluded, Timida reveals herself as a vicious (and loud) shrew; and Morosus is suitably humbled. 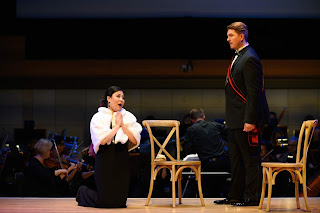 The scene that Shin performed is the one in which she is first wooed by Morosus (bass Stefan Egerstrom). She nailed all of the qualities of her assumed character with thoroughly engaging visual language; and I would love to see how she could handle the after-the-wedding transition. Her vocal work was equally solid, and all of her exchanges with Egerstrom were consistently on the money. Mind you, by the time the scene was performed, Shin had already exercised her qualities as the sassy maid in the first act of La rondine. Indeed, in that act she is the one to get the last word as she heads out for a night on the town with the poet Prunier (tenor Victor Starsky), being the one woman before whom he can drop his pretensions. 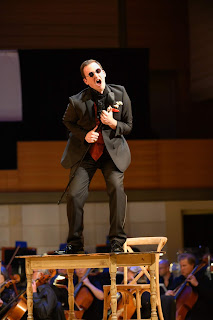 Among the performances of the more serious roles, bass-baritone Andrew Dwan displayed a solid command of all of Méphistophélès’ character qualities in Faust without overplaying any of them. His voice was consistently secure, and he knew how to shape every vocal phrase with its dramatic significance. For that matter, all of the physical details around the encounter that Faust has with Valentin (with Méphistophélès pulling the strings in the background) were expertly choreographed all the way up to Valentin’s dying curse.

If Faust takes one to the brink of melodrama, then both Lucia and Trovatore boldly go over that brink. In the latter mezzo Alice Chung brought as much depth to the character of Azucena as Salvatore Cammarano’s libretto and Verdi’s music allowed. In Lucia she took on the “supporting role” of Alisa but was just as convincing. Here it was up to soprano Chelsea Lehnea (Lucia) and tenor Salvatore Atti (Edgardo) to unleash the full-throated vocal intensity. They did not disappoint; and Condemi endowed the staging with about as much comprehensibility as the libretto (again by Cammarano) would allow.

This summer’s Festival is definitely off to a good start.
Posted by Stephen Smoliar at 7:56 AM