A Memorial Album for Werner Pirchner from Gramola

This past Friday the Austrian Gramola label released an album of the three piano trios by Werner Pirchner. The performers are the three brothers of the Eggner Trio, Georg Eggner on violin, Florian Eggner on cello, and Christoph Eggner on piano. Born in the Austrian state of Tyrol in 1940, Pirchner initially established himself as a jazz musician, specializing in the vibraphone; but, as was the case with many of his contemporaries in both Europe and the United States, he began to explore new directions in the late Sixties. He died in 2001, after having spent the last fifteen years of his life exclusively as a composer.

Like many of my generation, my first encounter with Pirchner was through (what else?) ECM New Series through the release of the album EU in 1968. (In my own case the two-CD version of this album became part of my collection shortly after I had acquired the Tabula Rasa album of the music of Arvo Pärt.) This was a time when those of us in the United States tended to be only remotely aware of the European Economic Community and its expansion into the European Union through the ratification of the Maastricht Treaty, which would only take place in 1993.

At a time when the transformation of Europe was being treated with high seriousness, Pirchner used his music to subject it to low comedy. The booklet notes for EU by Thomas Rothschild, translated into English by Helga Tilton, offer up the following influences on Pirchner’s creativity: Erik Satie, Frank Zappa, Spike Jones, and Gerard Hoffnung. In the current context of hand-wringing over whether or not the European Union will last much longer, EU is as influential as ever, now offering up the hypothesis that the Union is in jeopardy because no one involved with its future has a sense of humor.

Humor is also present in all three of the piano trios. That begins with the fact that each one of them has a title. Translated into English these titles are:
Neither Jones nor Hoffnung are particularly influential; and, if there is any sense of Zappa, it would be from the time of the works commissioned by Pierre Boulez (and that predisposition for question marks). On the other hand Satie’s deft skill at capturing wit through almost bare-bones simplicity was definitely with him when he was working on each of these pieces. The results may not deliver the sorts of belly laughs encountered on the EU album; but there is very much a sense of John Cage’s “sunny disposition” as the best medicine for enduring the many follies in world affairs that Pirchner encountered during those last fifteen years of his life.

Nevertheless, there is definitely a sense that Pirchner’s prankishness remained with him to the very end. Those with a copy of EU may recall the photograph of Pirchner at the end of the booklet: 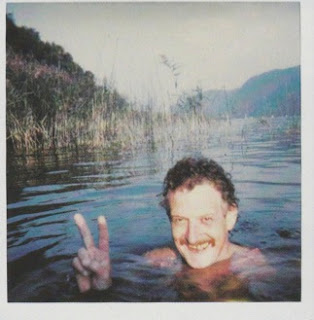 Compare this with the cover of the new album: 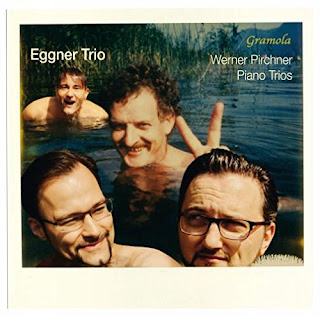 Pirchner has not changed very much. The expression is almost identical; and he seems to be in almost the same place but this time with the three Eggner brothers. On the other hand his V-sign now has an entirely different connotation. (Presumably, in the EU photograph, he was invoking the “peace sign” that was so popular in the United States.) Then there is the lower-right corner: Is that a bathing brush? The Eggner Trio should be thanked for providing this means through which Pirchner’s spirit can endure.
Posted by Stephen Smoliar at 8:42 AM