The featured artists at this month’s installment in the 2016–2017 season of Third Sunday Concerts at the Church of the Advent of Christ the King will be the members of the Agave Baroque chamber ensemble. This is a quintet whose members are, in the left-to-right order of the photograph below, Kevin Cooper playing both Baroque guitar (as in the photograph) and theorbo, violinists Aaron Westman and Anna Washburn, organist Henry Lebedinsky, and William Skeen on gamba: 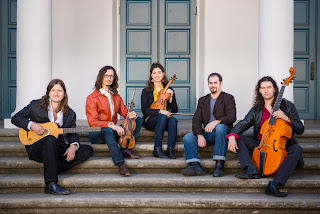 The full title of the program to be presented will be The Fantastical Mr. Biber: The experimental harmonies, virtuosity, and modernism of Heinrich Ignaz Franz Biber.

Past studies in both linguistics and literature lead me to begin by unpacking that adjective “fantastical.” The definition in the North American English division of the Oxford Living Dictionaries (to honor the font selection) Web site is “Imaginative or fanciful; remote from reality.” This is illustrated with the phrase “a big, fantastical popcorn movie.” It would be fair to say that, over the course of his career, Biber took on both of those definitions of “fantastical” (and without a popcorn maker at his disposal, to boot). Whether or not Agave Baroque will do the same remains to be seen, but it is probably worth recalling that Biber’s domain was far from limited to intimate chamber groups.

Those who follow early music performances in San Francisco will probably recall that the high point of the summer of 2013 was the performance of Biber’s Missa Salisburgensis as part of the American Bach Soloists Festival. To say that Biber summoned up an imaginative approach to resources would be the height of understatement. The performance required four sopranos, four altos, four tenors, four basses, and two mixed choruses (both SSAATTBB). The instrumental resources consisted of four recorders, two oboes, two cornetti, ten trumpets, three trombones, two sets of timpani (each with four drums), two organs, four violins, eight violas, and continuo.

However, it is in his more intimate music that his “experimental harmonies” address the “remote from reality” side of the definition of “fantastical.” The most familiar example is probably his collection of sixteen pieces known as the Rosary Sonatas. This is a cycle in which the first fifteen sonatas depict, in succession, the fifteen Mysteries of the Rosary (which, themselves, would be regarded as “remote from reality” by the secular-minded), followed by an extended passacaglia. Each of these pieces requires a different tuning of the violin as follows:

Created by by de:User:Frinck and edited by de:User:Qpaly, from Wikimedia Commons (licensed under the Creative Commons Attribution 2.5 Generic license)

(It may be necessary to click on this image to see it in its original scale.) Note the annotation for the eleventh sonata. In this case not only the tuning but also the ordering of the strings has been changed. Here is a photograph of that reconfiguration: 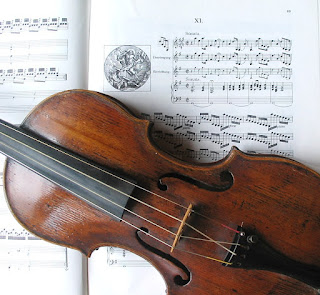 Note that the photographer placed the violin on top of the score, thereby including the key signature the soloist is obliged to follow.

Fantastical, indeed! Again, this sort of experimentation with scordatura (retuning) techniques was not a one-off. The Rosary Sonatas were probably completed around 1676. About twenty years later Biber published his Harmonia artificioso-ariosa, in which he explored scordatura tunings for multiple instruments. This collection consists of seven partitas for two instruments and continuo, so there is a good chance that both collections will be represented in the program that Agave Baroque will bring to their Third Sunday recital.

Like all Third Sunday events, this concert will start at 4 p.m. on the third Sunday of the month, May 21. The Church of the Advent of Christ the King is located at 261 Fell Street, between Franklin Street and Gough Street. The entry is diagonally across the street from the SFJAZZ Center. For those planning on driving, parking will be available in a lot adjacent to the church. A festive reception will follow the performance in Lathrop Hall; and, presumably, all members of the ensemble will be available to answer questions about Biber’s fantastical inclinations. The concert is free, but there is a suggested donation of $20.
Posted by Stephen Smoliar at 9:50 AM