These days it seems as if there is more news about plans to protest the inauguration of Donald Trump on January 20 than there is about the inaugural ceremony and subsequent celebrations themselves. It is therefore more than a little heartening to report that one of our local performance ensembles is taking a more positive approach in opposition to the Washington festivities. Frequency 49 has announced a benefit concert that will take place on Inauguration Night, all proceeds of which will be applied as a donation to the American Civil Liberties Union (ACLU). Music has been a medium of protest throughout the history of the United States and even earlier in Europe; so it is highly gratifying to know that several of our own local music-makers will be continuing that tradition. 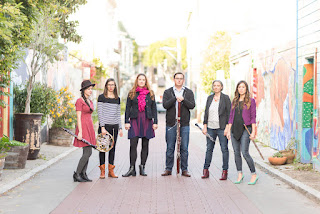 from the Frequency 49 Web site

For those unfamiliar with the ensemble, Frequency 49 is a sextet that was formed in 2012, whose current members are Katrina Walter (flute), Adrienne Malley (oboe), Jeannie Psomas (clarinet), Patrick Johnson-Whitty (bassoon), Leslie Hart (french horn), and Margaret Halbig (piano). This is the instrumentation required for the sextet that Francis Poulenc completed in 1932. That piece is not only part of Frequency 49’s repertoire but also one of the selections to be performed at the Inauguration Night Benefit Concert.

The program will also include music by two composers who have put a political slant on their work, Ted Hearne (“Furtive Movements”) and Alyssa Morris (“Brokenvention”). For this occasion Frequency 49 will share the stage with other performers, including Ryan Zwahlen on cor anglais and three groups, Wild Rumpus (whose pianist is Halbig), the Divisa Ensemble (whose members are flutist Tomiko Tsai, oboist Meave Cox, violinists Eugenia Wie, violist Stephanie Ng, and cellist Sara Styles), and the Siroko Duo of flutists Jessie Nucho and Victoria Hauk. Both Divisa and Siroko will have their own sets on the program, whose selections have not yet been announced.

This performance will begin at 7 p.m. on Friday, January 20. The venue will be the First Unitarian Universalist Society of San Francisco, located at 1187 Franklin Street on the southwest corner of Geary Boulevard. Admission for all will be $30 with all proceeds benefiting the ACLU. Tickets may be purchased in advance online through a Brown Paper Tickets event page. Those interested in giving more to the ACLU may do so through a Web page on the organization’s Web site. However, readers should be aware of the fine print on that page, which states that these contributions are not tax-deductible.
Posted by Stephen Smoliar at 9:10 AM