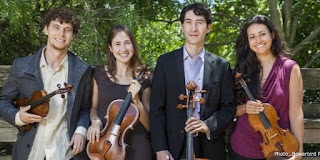 Once again the Chamber Music Society of San Francisco (CMS of SF) has announced a new program that will feature guest artists. The ensemble is the string quartet whose members are (left-to-right in the photograph above) violinist Jory Fankuchen, violist Clio Tilton, cellist Samsun van Loon, and violinist Natasha Makhijani. The latest work they have prepared for performance is Johannes Brahms’ Opus 36 sextet in G major, meaning that two guests will be required. These will be violist Jodi Levitz, who not only teaches viola at the San Francisco Conservatory of Music but also is Chair of the String and Piano Chamber Music program, and cellist James Jaffe. CMS of SF will begin its program with Wolfgang Amadeus Mozart’s K. 421 quartet in D minor, one of the six quartets that Mozart dedicated to Joseph Haydn and the only one of the six in a minor key.

This program will be given two performances on two consecutive dates next month. The first will begin at 7:30 p.m. on Saturday, March 11, and is expected to last about two hours. It will take place at the Noe Valley Ministry, which is located in Noe Valley at 1021 Sanchez Street. Ticket prices at the door will be $20 with a $5 rate for those aged eighteen and under. Tickets may be purchased online in advance through an Eventbrite event page; and until tomorrow there will be an “Early Bird” rate of only $15 for general admission.

The second performance will be a house concert, which will begin at 3 p.m. on Sunday, March 12. The hosts will be Cathy and Bill Madison, who live north of Golden Gate Park near the corner of Fulton Street and Funston Street. All tickets will be $30 and may again be purchased through an Eventbrite event page. Specifics about the venue will be provided once tickets have been purchased. The Madisons will then host a wine and cheese reception with the musicians following the performance.

In addition CMS has announced plans for its third annual fundraiser. This will include music as well as food, wine, artisanal Armagnac, and a silent auction of one-of-a-kind art pieces. As in the past, there will be both VIP and general admission. The fundraiser will take place on Saturday afternoon, April 22; and VIP tickets allow for early admission at 2:30 p.m. VIP status also includes a champagne toast with the artists, reserved seating, and first access to the silent auction. VIP tickets are $125, while general admission, which will begin at 2:30 p.m., will be $75. Both levels of tickets are currently available for sale through an Eventbrite event page. The venue will be in Ashbury Heights; and, as is the case with next month’s house concert, specifics about the venue will be provided once tickets have been purchased.
Posted by Stephen Smoliar at 10:32 AM