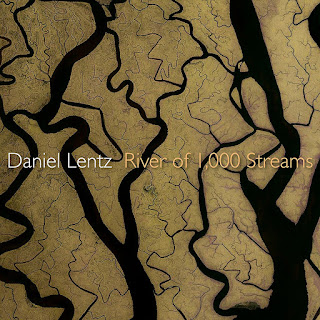 This past August Cold Blue Music released an album that brings out the best of what one can do in combining a grand piano with real-time digital processing. The title of the album is River of 1,000 Streams, which is also the title of the only track of a single composition by Daniel Lentz. Both the title and the music were inspired by a visit the composer made to the confluence of the Yellowstone River and the Missouri River.

The result was a composition for solo piano performing with a computer running MAX software. The software is designed to “echo” sounds from the piano. The echoes themselves are relatively short; and they may reappear at different temporal distances from the source, between half a second and 25 minutes. As the piece progresses, the textures of the samples that get echoed will gradually become thicker. The effect is thus one of “cascading echoes;” and, there are eleven of them that accumulate before the piece runs its course. To return to the inspiration for the music, the result amounts to a torrent of sonic activity. (Think of how Bedřich Smetana used a full orchestra to depict the Moldau building in strength as it flows, and now imagine that effect being achieved through piano and electronics with 21st-century rhetoric.)

On this recent recording the pianist is Vicky Ray, and the duration is a little bit short of half an hour. That provides sufficient time for the attentive listener to appreciate not only the overall textural effect but also the individual threads that intertwine. The effect is lush without devolving into any of those clichéd efforts to depict grandeur. This is an impression of a very moving visual experience; but Lenz has just the right discipline to focus on the visual details, rather than on “the artist having the experience.” Nevertheless, there is so much abundance of detail that one is likely to encounter new listening approaches each time this recording is played.
Posted by Stephen Smoliar at 9:39 AM