Music for All Saints and All Souls from Schola Adventus 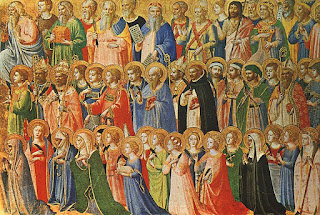 Fra Angelico's The Forerunners of Christ with Saints and Martyrs (from Wikimedia Commons, public domain)

November begins with two major Christian festivals celebrated on two consecutive days. In the Western calendar All Saints’ Day is celebrated on November 1, followed by the commemoration of the faithful departed on All Souls’ Day, November 2. Indeed, to be accurate about things, All Saints’ Day is preceded by a Vespers service at the end of the preceding day, October 31. That is known as the All Hallows’ Eve service, whose name would subsequently be shortened to Halloween. Thus, the services taking place on the three days from October 31 to November 2 are known collectively as Allhallowtide, during which prayers are said for the dead, including saints (hallows), martyrs, and those aforementioned faithful departed.

The Church of the Advent of Christ the King will celebrate High Mass on both All Saints’ Day and All Souls’ Day. As is always the case on such major occasions, resident choir Schola Adventus, under the leadership of Music Director Paul Ellison, will provide the music for both of these services. The Mass setting for All Saints’ Day will be Tomás Luis de Victoria’s Missa O quam gloriosum, and on All Souls’ Day Schola Adventus will sing Juan Vásquez’ setting of the Requiem text.

The All Souls’ Day service will also included the chanting of the Dies irae (day of wrath) sequence, along with additional Gregorian chant interpolations. On All Saints’ Day Schola Adventus will sing the Gregorian chant for the propers of the day. They will also sing an introit (“Rejoice we all” by Healy Willan), a gradual (“Holy is the true light” by William Henry Harris), and an anthem (“Give us the wings of faith” by Ernest Bullock). Finally, there will be a performance of Victoria’s “O quam gloriosum” motet, the thematic source for the Mass setting that will be sung on All Saints’ Day.

The High Mass for All Saints’ Day will be celebrated by Father John Porter, and the Requiem Mass for All Souls’ Day will be celebrated by Father Rod Thompson. Father Paul Allick will assist as Preacher for both services. The Church of the Advent of Christ the King is located at 261 Fell Street, between Franklin Street and Gough Street. The entry is diagonally across the street from the SFJAZZ Center. This is an inclusive parish of the Episcopal Church in the Anglo-Catholic tradition. Those wishing further information may call 415-431-0454. Those driving will be able to use the parking lot adjacent to the church whose entrance is on Hickory Street.
Posted by Stephen Smoliar at 10:43 AM