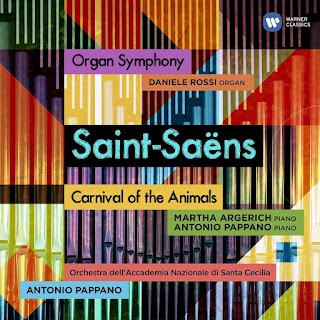 About a week and a half ago, Warner Classics released a new album featuring the Orchestra dell'Accademia Nazionale di Santa Cecilia led by its current Music Director, Antonio Pappano. The CD offers two familiar compositions by Camille Saint-Saëns, a live recording of his Opus 78 (“Organ”) symphony in C minor and a studio recording of his fourteen-movement suite, “The Carnival of the Animals.” Of these two, the latter has more going for it.

Note the lack on an opus number. “The Carnival of the Animals” was written for a private performance; and the instrumentation is minimal. Performance requires two pianos (played by Pappano and Martha Argerich), two violins (Carlo Maria Parazzoli and Alberto Mina), viola (Raffaele Mallozzi), cello (Gabriele Geminiani), bass (Libero Lanzilotta), flute doubling on piccolo (Carlo Tamponi), clarinets in B-flat and C (Stefano Novelli), glass harmonica, and xylophone. (The booklet lists percussionists Marco Bugarini and Edoardo Albino Giachino without says who plays what, and the photographs in the booklet suggest that the glass harmonica was replaced by a synthesizer.) Except for Argerich, all performers are members of the Accademia Nazionale di Santa Cecilia.

Saint-Saëns intended this to be humorous entertainment to be enjoyed among friends. He expected those friends to be knowledgeable about repertoire, which is clear when he has elephants dancing to the “Dance of the Sylphs” from Hector Berlioz’ The Damnation of Faust. He also has the tortoises dance Jacques Offenbach’s famous can-can music at a glacial pace. (Both of those examples tend to be cited in just about any account to this score. On the other hand not even the Wikipedia page for this piece makes note of the presence of Jean-Philippe Rameau among the hens.) However, tucked in among all of these familiar animals is a movement entitled “Pianistes,” which depicts a pair of young piano students going about their exercises. All too often, this is played “straight;” but both Argerich and Pappano had the confidence to give this music the sort of error-laden treatment that Saint-Saëns most likely envisioned.

Similarly, one often encounters performances that involve an entire orchestra. This would probably be more effective when the performance is given in a large concert hall, but the chamber resources are far more effective. When one is closer to the performers themselves, those performers are more likely to wink-and-nod their way through the composer’s many jokes; and the chemistry between those making the music and those listening to it is all the stronger for that intimacy. However, when technology imposes the detachment, the humor is up against greater obstacles. At best this new recording will help the listener become more familiar with the score and thus be more receptive to the full extent of the composer’s humor when given the opportunity of a chamber music performance.

Physical presence is also a major factor where Opus 78 is concerned. The fact is that this is music that really does not deserve to be recorded, particularly for listeners who now experience music only through their ear buds. Indeed, when the organ is encountered in the Poco adagio section that concludes the first of the symphony’s two movements, its appearance is not so much thematic as one of a viscerally physical presence of pedal tones. (Those who follow articles about opera on this site may recall that Giacomo Puccini achieved the same effect with equal success in his use of the organ at the end of the second act of his Turandot opera.) I have been fortunate enough to have listened to this symphony in two major concert halls, one on either side of the country; and I therefore feel qualified to say that, once you have experienced your body vibrating sympathetically with the lowest tones in Saint-Saëns’ score, you will never be satisfied with any currently available recording.
Posted by Stephen Smoliar at 9:15 AM