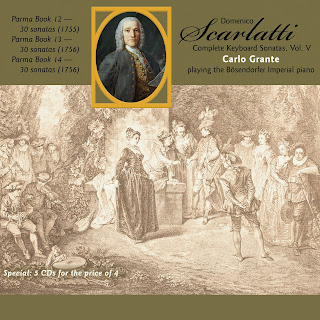 A little over a month ago, Music & Arts released the fifth volume in Italian pianist Carlo Grante’s project to record all of the keyboard sonatas of Domenico Scarlatti. Regular readers know that I have been following this project with great interest, even though, during my time with Examiner.com, I took the time to report on the reissue of a Warner Classics box set of all of Scarlatti’s keyboard sonatas performed by the late harpsichordist Scott Ross. Grante’s performances have been just as capable technically as Ross’; but he also knows how to shape his approaches to expressiveness around the piano, rather than the harpsichord. This puts me in the somewhat awkward position of having little more than business-as-usual to say about his latest release.

Nevertheless, there is definitely something different about this new release that has nothing to do with musical values. By now I have become used to the fact that the indexing techniques over at Amazon.com are so arbitrary that I often have to summon up rather unorthodox strategies to find the Web pages for a particular album. For Grante’s fifth volume I was unable to come up with a strategy that worked; and, as a result, I decided to see if Google would do a better job. The bottom line is that Google could not negotiate the dense fog of searching Amazon any better than I could.

The good news, however, is that, through Google, I was able to find the Web site for Music & Arts itself. As might be guessed, this site has a search engine that takes Music & Arts products into account somewhat more effectively. Furthermore, this is a site from which one may purchase directly from Music & Arts; and this site has a Web page for Grante’s fifth volume.

All that remains, therefore, is to account for what one is getting when one commits to listening to this volume, which, like the fourth volume, consists of five CDs. As has already been observed, the largest published collection of sonatas published during Scarlatti’s time is the set of fifteen volumes published in Parma between 1752 and 1757. Grante has been working his way through these Parma volumes since the release of his own first volume, and his fifth volume of CDs accounts for the twelfth, thirteenth, and fourteenth of the Parma volumes. One should thus expect that the next release will close off the Parma traversal and turn to the other collections, which include pieces that were also published in the Parma volumes. Since those Parma volumes account for 463 of the 555 sonatas in Ralph Kirkpatrick’s catalog, that means that 92 sonatas will remain to be recorded. Given that this fifth volume consists of 90 sonatas, there is a good chance that Grante’s project will conclude with his next release.
Posted by Stephen Smoliar at 12:18 PM