Lianna Haroutounian to Give her US Solo Recital Debut 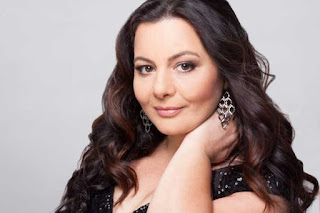 Those who have been following the San Francisco Opera (SFO) over the course of this decade are likely to be familiar with soprano Lianna Haroutounian (pictured above). Haroutounian made her SFO debut on October 23, 2014 in the title role of the company’s 37th production of Giacomo Puccini’s Tosca. She sang with two vocalists familiar to SFO audiences, both former Adler Fellows who provided recaps of their roles in the previous revival of the opera. The role of Mario Cavaradossi was taken by tenor Brian Jagde (about to return to the War Memorial Opera House for the second round of performances of Puccini’s Turandot); and Mark Delavan sang the role of Baron Scarpia. Haroutounian distinguished herself not only through her technique but also through acting skills that took what can easily come off as little more than a cardboard figure and get at the human substance behind mere appearances.

She then returned to the War Memorial Opera House with a series of ten performances that began on November 6, 2016. She again sang the title role in a Puccini opera, this time the revival of a production of Madama Butterfly based on the imaginative visual environment conceived by Jun Kaneko. Once again Haroutounian delivered a memorable performance by departing from the usual expectations. She had the courage to present the delusional side of her character in a manner that was poignant without being maudlin. (This conception of the role owed much to Haroutounian’s perceptive interactions with Adler Fellow Zanda Švēde’s portrayal of the maid Suzuki.)

This month Haroutounian will return to the War Memorial, this time for her United States debut as a solo recitalist. She will perform with pianist Tamara Sanikidze, a former member of the SFO musical staff with whom Haroutounian most likely worked during her preparations for both Tosca and Madama Butterfly. As might be expected, the program Haroutounian has prepared will include a few opera arias from Adriana Lecouvreur (Francesco Cilea), L’amico Fritz (Pietro Mascagni), and Manon Lescaut (Puccini). However, these will constitute the “dessert course” following an imaginative “full meal” of selections from the art song repertoire.

The most unique element of Haroutounian’s program will probably be her decision to perform seven songs by the Armenian composer known as Komitas. Komitas is considered the founder of music of Armenian nationalism. As was the case with Zoltán Kodály in Hungary, Komitas is recognized as one of the pioneers of ethnomusicology; and many of his compositions were inspired by his musicological research. He lived between 1869 and 1935, and one particular admirer of his work was Claude Debussy.

Haroutounian’s program will also include three songs by each of two different Russian composers, Pyotr Ilyich Tchaikovsky and Sergei Rachmaninoff. Neither of these composers is particularly well known for his contributions to the art song repertoire. However, for those who have a great interest in that repertoire, both of them have contributed several memorable gems. She will also present three songs from Gioachino Rossini’s Péchés de vieillesse (sins of old age) collection, along with three songs by Vincenzo Bellini and one by Gaetano Donizetti.

This recital will begin at 3 p.m. on Saturday, November 25. This event will take place in Herbst Theatre in the Veterans Building at 401 Van Ness Avenue. Located on the southwest corner of McAllister Street, the venue is convenient for public transportation on both north-south and east-west Muni lines. Ticket prices are $45 for the Balcony and the side areas of the Dress Circle, $55 for the remainder of the Dress Circle, the rear of the Orchestra, and all but the front Boxes, and $75 for the remainder of the Orchestra and the first two Boxes on both sides. City Box Office has created an event page with an interface to the seating diagram that facilitates the ability of visitors to select their seats.

That event page also has an option for students to get balcony tickets for only $25. After the $45 rate has been selected from the pull-down menu, a box will pop up stating that new pricing is available for students. There is a box labled "Coupon Code," into which students may enter the code STUDENT to qualify. The display will now show the reduced price.]
Posted by Stephen Smoliar at 12:02 PM