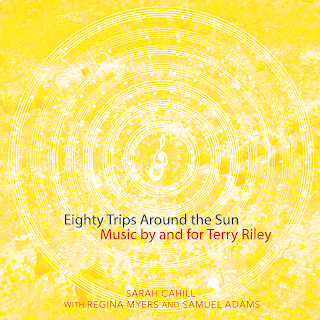 Composer Terry Riley celebrated his 80th birthday on June 24, 2015; and pianist Sarah Cahill has been hard at work to honor the occasion. The result only became available for download from Amazon.com his past September 29, but it was definitely worth the wait. It is a four-CD album entitled Eighty Trips Around the Sun: Music by and for Terry Riley; and its very title serves to knowledge the “cosmic” significance of having lived for 80 years. The collection is arranged in such a way that the first two CDs survey Riley’s own music and the other two present eight new works composed to honor Riley’s landmark birthday, each by a different composer.

[sentences updated to reflect input provided by Cahill, 11/20: 9:15 a.m.: All of the selections on the first CD were taken from the Piano Works collection of Riley's music published by Chester Music in April of 2015. Two short pieces composed between 1958 and 1959, a time when Riley’s primary influence was Arnold Schoenberg, are the first two tracks on the first CD.] However, Riley would shortly thereafter abandon the rigorous approach to notation that he took in those pieces; and he would not return to that approach for 35 years. During that intervening period he focused almost entirely on improvisation, and anything he committed to paper served more for guidance than for specification. This would explain why the List of Works Web page on his Web site includes “Book 5,” “Book 6,” and “Book 7” of The Heaven Ladder but not any of the earlier “books.” If these existed at all, they probably only served as guides for improvisation. (Even “Book 6” consists only of “minimal sketches.”)

“Book 5” is the one collection represented in its entirety by Cahill. It is a set of five works for four hands on a single piano keyboard [added 11/20, 9:30 a.m.: written on a commission from Cahill], and Cahill recorded all of them with pianist Regina Myers. She also recorded two of the solo pieces from “Book 7,” “Misha’s Bear Dance,” which was played by Myers, and “Fandango on the Heaven Ladder,” which Cahill played herself. Myers also plays “Simone’s Lullaby;” and Cahill plays “Be Kind to One Another,” which Riley wrote for her A Sweeter Music project.

The track from these first two CDs with the most interesting backstory, however, is the one entitled “Keyboard Studies,” which is 25 minutes in duration. When John Cage was working on his Notations project, for which he collected a single score page from each of 269 composers, Riley gave him a sheet of staff paper that had “Keyboard Studies” at the upper left and “Page 2” at the upper right. Below that header were eight lines, each with a fragment of notation giving only pitch class information (with no rhythm).

Cahill obtained a copy of the full score and then asked Riley how to play it. He suggested combining the figures on the first page with those on the second. Cahill interpreted this by playing one set of figures with one hand and another set with the other. Only later did she realize that there were two “Keyboard Study” pieces, one on the first page and the other on the two remaining pages. This does not explain why the plural form “Studies” appears in Cage’s book. However, it does explain why the CD track is labeled with the plural form, “Keyboard Studies,” because Cahill’s performance superimposed the two studies.

The result makes for absorbing listening, very much in the spirit of what Philip Glass calls “music with repetitive structures.” Those familiar with Glass should have no trouble differentiating Riley’s approach to this concept from Glass’. As long as one embraces the concept, it is easy to buy into the intricacies that emerge from Cahill’s approach to playing the fragments that Riley had notated.

The contributing composers for the remaining two CDs are Riley’s son Gyan, Danny Clay, Samuel Adams, Christine Southworth, Keeril Makan, Elena Ruehr, Dylan Mattingly, and Pauline Oliveros. The Oliveros piece is the longest and fills the fourth CD. It is based on an indeterminate score for one or more players. The performers are tasked with exploring the different ways in which two or more sounds can rapidly alternate. Adams joined Cahill for the performance that was recorded for this album.

As might be guessed, Riley’s piece involves the son recalling the life of his father and the latter’s diverse activities. The title “Poppy Infinite” refers to the improvised piece “Poppy Nogood and the Phantom Band,” which involved the father capturing samples of music he was playing on saxophone and then playing in counterpoint against those samples in a way that builds up the number of voices sounding simultaneously. Two of the contributing composers offered reflections on what may be Riley’s best known composition, “In C,” Makan’s “Before C” and Ruehr’s “In C Too,” both of which amount to reflections of the underlying pulse that drives the progress of “In C.”

Taken as a whole, the album makes for many absorbing listening experiences. Nevertheless, as one who has listened to Riley performances in a variety of settings, I have to say that I have a personal preference for his approaches to improvisation. I have experienced those approaches both in concert and on recordings, and I am consistently struck by how they always seem to go beyond any preconceived notions of genre that may be kicking around my cerebral cortex before the music starts. [updated 11/20, 9:25 a.m.:  Still, Cahill has made it her life's work to interpret those scores that Riley has committed to notation. Those who have followed this site regularly know that there is no such thing as a definitive interpretation of notation. One might almost say that, once one interpretation has been mastered, it is time to seek out another one. (I like to say that I learned this precept from Pablo Casals, but actually I learned it from reading Bernard Greenhouse’s account of his studies with Casals!) The tracks of Riley’s own music on Cahill’s collection provide a vivid sense of the diversity of material that Riley could engage as a point of departure, but the performances are just as vivid for the immediacy that Cahill brings to their interpretations. These are performances that are likely to sustain my own attentive listening for some time to come.]
Posted by Stephen Smoliar at 12:17 PM