Last night, as is the case every year around this time, the War Memorial Opera House hosted this year’s Merola Grand Finale, the annual “sampler” program that provides the last opportunity to relish the vocal qualities of this summer’s trainees in the Merola Opera Program. As always, diversity was the order of the evening; and the program seems to have been planned deliberately to steer away from the familiar warhorses. The result was that every selection was as much a journey of discovery for the audience as it was for the performers.

Indeed, the evening opened with a rare opportunity to appreciate a “first draft” by Wolfgang Amadeus Mozart. “Rivolgete a lui lo sguardo” (return his glance) was the first version of the aria that Guglielmo, disguised as an “Albanian,” sings to impress the righteously faithful sisters Fiordiligi and Dorabella in the K. 588 opera Così fan tutte (thus do all women). It was replaced by the much shorter “Non siate ritrosi” (don’t be shy); and Ludwig Ritter von Köchel cataloged “Rivolgete” as the K. 584 concert aria.

Mozart made the right choice. “Rivolgete” is practically epic in its scale of braggadocio. Guglielmo just won’t shut up in praising his many virtues. The replacement, on the other hand, runs less than two minutes, breaking off in the middle when the sisters run away. Nevertheless, last night bass-baritone perfectly captured all of the fatuous self-preening of Lorenzo Da Ponte’s text without ever coming off as tiresome or ridiculous. Stage Director Victoria Crutchfield turned the setting from the sister’s garden into a cocktail party with lots of people having had too much to drink. She may have made the duration a bit more bearable by filling it with distractions; but those distractions did just that, blunting the full impact of Guglielmo’s self-centeredness.

This turned out to be an omen for the rest of the evening. In each of the following numbers, whether it involved solo or group singing, Crutchfield never seemed to home in on the dramatic context that would motivate the performance. The result was that one came away with an abundance of memories of singing at its finest but probably with very little recollection of either the what or the why behind the singing. Furthermore, because so much of the repertoire was unfamiliar, neither the program sheet nor the projected titles did much to inform the audience of the context for what was being performed. Indeed, if one paid too much attention to the people-moving on stage, one was likely to miss the projection identifying the opera from which the next selection was extracted. 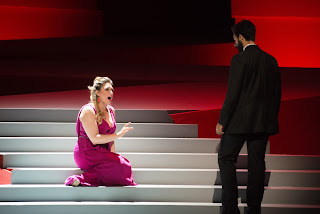 On the other hand the temptation of the Composer (Samantha Hankey) by Zerbinetta (Jana McIntyre) in the Prologue portion of Richard Strauss’ Ariadne auf Naxos was all about scheming to get what you want: 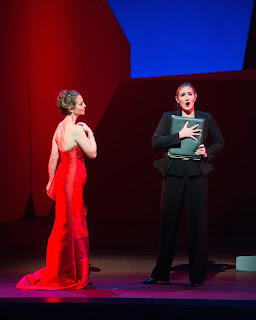 In McIntyre’s portrayal, one could almost hear the words “Nailed it!” in Zerbinetta’s head as the episode concluded.

The real warhorse of the evening came from Franz Lehár. Xingwa Hao could not have done a better job of channeling Richard Tauber in his delivery of “Dein ist mein ganzes Herz” (you are my heart’s delight) from The Land of Smiles: 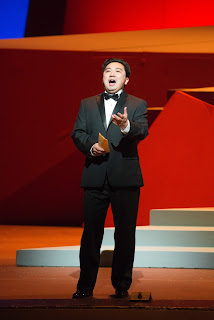 Mind you, my own knowledge of Tauber comes only from his recordings, since I was not yet two years old when he died. However, this was also the sort of music that brought back fond memories of The Voice of Firestone, my “first contact” with vocal warhorses.
Posted by Stephen Smoliar at 8:09 AM