Those who follow my opera performance articles regularly know that I try, whenever possible, to arrange for at least one occasion when I have a good vantage point for the action in the orchestra pit. This turned out to be a particularly informative situation for the current performance of Richard Strauss’ “Elektra” by the San Francisco Opera. As has already been observed, 95 players constitute the ensemble conducted by Henrik Nánási; and the score demands that he be as attentive to the “action in the pit” as he is to shaping the efforts of the vocalists up on stage.

Most important is another previous observation made in comparing this production with that of Giacomo Puccini’s Turandot, which is currently alternating with “Elektra.” “Elektra” may require more musicians; but, as I observed, Turandot is the offering that is “unabashedly loud” (and not in any negative way). What is most impressive about Strauss is how he covers the full breadth of dynamic range, even to the point at which the attentive listener can be aware of the solo string passages. Thus, having already praised Nánási for his attentiveness to “every last detail of instrumental activity,” I should add that each of those details had its own dynamic level to establish its rhetorical significance.

In addition Nánási’s interpretation suggested that Strauss had some very clear spatial effects in mind. These do not register when one cannot see the musicians. However, as is the case at an orchestra concert, “visual input” provides an opportunity to observe how thematic material can perambulate through the ensemble. Indeed, Strauss seemed to be particularly skilled at creating the auditory equivalent of a movie “dissolve” effect, in which thematic movement involves the gradual departure of one set of instruments matched by the gradual arrival of another.

All of this must then coexist with all of the activities on stage conceived by Keith Warner and realized for these performances in San Francisco by Anja Kühnhold. Warner’s museum setting suggests a coexistence of the immediate present with a past that is at least legendary and possibly totally mythical. Beyond the tales of the House of Atreus conceived by the Homeric bards, Aeschylus, Sophocles and the impact of those sources on Hugo von Hofmannsthal (and possibly Jean-Paul Sartre), Warner unfolds a narrative that suggests that an ordinary woman’s understanding of herself is emerging from her understanding of Elektra and her pivotal role in the broader Atreus tragedy.

Thus, while Strauss is exploring “dissolves” of his thematic material across his instrumental resources, Warner provides us with similar dissolves between the hear-and-now present and a mythic past. Furthermore, Warner is courageous enough to lead us through Hofmannsthal’s libretto as a journey of self-knowledge and then bring us to a conclusion that suggests that his present-day protagonist may not have advanced very much, if at all. It is almost as if Warner’s resolution of the staging may be looking not only at the Ancient Greeks but also at the final stanza of “Little Gidding,” the last of the four poems that T. S. Eliot published as Four Quartets:

We shall not cease from exploration
And the end of all our exploring
Will be to arrive where we started
And know the place for the first time.

Having followed Elektra through her convoluted confrontations with a series of murders (one from the recent past and two taking place over the course of the opera), Warner is suggesting that she now knows her “place” in the House of Atreus for the first time. If Warner’s present-day protagonist has followed this journey, then Warner’s journey comes back to the museum where it started; but he leaves it to us to resolve just how that protagonist now knows that “place for the first time.” 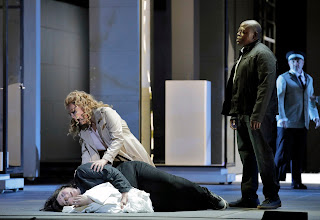 Back at the museum with Elektra (Christine Georke stretched out on the floor), Chrysothemis (Adrienne Pieczonka), and Orest (Alfred Walker, standing), photograph by Cory Weaver (courtesy of the San Francisco Opera)

Perhaps Warner intended to subject those of us on audience side to a deliberately disorienting journey at the end of which we are the ones arriving “where we started,” confronted with knowing “the place for the first time.” That would clearly make for much more than a sit-back-and-follow-the-story experience. Still, if you were fortunate enough to experience this performance as part of a group, Warner has created the sort of situation in which you really want to talk about what happened with the others. In other words there is a “social dimension” to this production that sets it apart from the vast majority of opera-going experiences; and my guess is that it will be far more memorable than most past such experiences.
Posted by Stephen Smoliar at 5:12 PM